A look at the key battles that fans may get to see during the course of the match.

Zimbabwe will look to end their seven-match losing streak in One-Day Internationals (ODIs) when they take on Australia in the fourth ODI of the ongoing triangular series. Sameer Jha looks at the key battles that fans may get to see during the course of the match.

A lot has changed for Zimbabwe since the massive 198-run defeat they were handed by Australia in the first ODI  of the Zimbabwe Triangular Series 2014. Tinashe Panyangara, their most experienced fast bowler, has been suspended for the rest of the series for disruptive behaviour. Allegedly, he shared a video of Mitchell Johnson bowling bouncers during The Ashes 2013-14 with his teammates on social networking platform WhatsApp. But in their match against South Africa, Prosper Utseya bowled the spell of his life and took a hat-trick against the mighty Proteas side. It’s another matter that his performance did not turn out to be match-winning, as the Zimbabwean batsmen failed to chase down a measly target of 232.

It is critical for the home side to take draw confidence  from the performance, and not rue their missed chances. For Australia, Michael Clarke and Nathan Lyon are expected to return, whereas Mitchell Johnson will be rested. Here are some of the key battles to look forward to in the game.

1. Prosper Utseya versus Aaron Finch: Utseya’s performance in the last ODI (5-36) will have him brimming with confidence. The 29-year-old who was born in Harare (where the match is being played), will certainly want to prove that his performance wasn’t a fluke.  It’ll be interesting to see him bowl to Aaron Finch, who scored an impressive century in the second ODI against South Africa. The Australian batsman will certainly fancy his chances against a bowling attack that is not threatening enough.

2. John Nyumbu versus Mitchell Marsh: Even though, Utseya’s hat-trick grabbed the headlines in the third ODI, he wasn’t the sole man responsible for restricting South Africa to 231. John Nyumbu, who took three wickets for 42, including the crucial wicket of Faf du Plessis, played an important role too. It’ll be interesting to see him go head-to-head with Mitchell Marsh, who scored a scintillating 89 the last time Australia faced Zimbabwe. Marsh, who can be a great asset for the Australian team if he manages to find his feet in international cricket, due to his all-round capabilities will look to put up another good show with the bat. In Mitchell Johnson’s absence, Marsh may just also open the bowling for the visitors.

3. Sikandar Raza versus Nathan Lyon: Sikandar Raza is definitely one man who can help Zimbabwe post or chase down a big total. Pakistan-born Raza, who discovered his love for cricket pretty late in his life, will face stiff opposition from Nathan Lyon who will be determined to make the most out of the chance he is given to cement his place in the Australian XI ahead of the ICC World Cup 2015.

4. Hamilton Masakadza versus Kane Richardson: Kane Richardson is another man who is aiming to make most of the opportunity, but his performances in the tour so far have been ordinary. However, he’ll hope to change that against Zimbabwe in fourth ODI by picking up a handful of wickets. Hamilton Masakadza though will make every effort he can to make sure that Richardson doesn’t succeed. The Zimbabwean veteran scored a gritty half-century in the first ODI against Australia, and his performance was the only saving grace for the hosts, in the 198-run defeat. 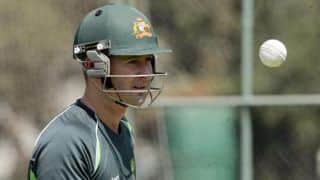 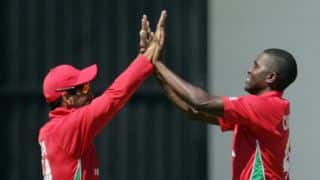