Zimbabwe's memorable heists across formats goes back to their upset over Australia in '83.

Zimbabwe beat Australia by three wickets in a One-Day International (ODI) at Harare. It is one of their most famous victories in recent times. In the past, Zimbabwe have recorded quite a few memorable victories against the bigger sides. Nishad Pai Vaidya lists 12 most remarkable wins in Zimbabwe’s journey at the highest level.

Zimbabwe’s victory over Australia in the fourth One-Day International (ODI) of the tri-series is proof of their potential. Though they have had their share of internal issues, Zimbabwe have often showed incredible character against the bigger sides and have scripted some memorable victories. The latest victory will also be one to savour along with some of their iconic moments of the past. Let us have a look at Zimbabwe’s 12 most memorable victories.

Zimbabwe’s introduction into international cricket was spectacular. Having qualified for the 1983 World Cup in England, they were up against Australia and they managed to beat Kim Hughes’ side by 13 runs. Australia won the toss and chose to bowl first at the minnows. Though Zimbabwe lost half their side for under 100, Duncan Fletcher bailed them out with a crucial knock of 69 not out. With support from Kevin Curran and Ian Butchart, Zimbabwe posted 239 in their 60 overs. Australia were led by Kepler Wessels’ 72 , but Zimbabwe put in a spirited effort in the field. Fletcher was at it with the ball as well, recording figures of four for 42. All his four scalps were of the top order batsmen as Zimbabwe strangled Australia, who finished on 226 for seven.

England were through to the semi-final of the 1992 World Cup, when they met Zimbabwe at Albury for their last league game. England won the toss and chose to field. Led by Ian Botham and Richard Illingworth, the England bowlers bundled out Zimbabwe for 134. That target shouldn’t have posed any problems for the in-form England side. However, they ran into an inspired Eddo Brandes. He dismissed Graham Gooch off the first ball of the innings and then rocked their middle order by getting Alan Lamb, Robin Smith and Graeme Hick. Though Neil Fairbrother and Alec Stewart tried to post a recovery, the Zimbabwe bowlers hit back to bowl them out, 10 runs short of the target. Brandes walked away with the man of the match award.

Zimbabwe had been granted Test status in 1992 and they searched for their first victory for over two years. When Pakistan toured in early 1995, they recorded their maiden win and in fine fashion at that. Batting first, Grant Flower scored 201 and that was backed up by tons from Andy Flower (156) and Guy Whittal (113 not out) as Zimbabwe amassed 544 for four. A pertinent fact is that the Pakistan attack featured Wasim Akram and Aaqib Javed. In reply, Pakistan were bowled out for 322 with Heath Streak’s spell of six for 90. Andy Flower imposed the follow on and Pakistan were bundled out for 158 to hand Zimbabwe their maiden Test victory.

Zimbabwe toured Pakistan in November 1998 and did something incredible. In the first Test at Peshawar, they managed to beat the hosts by seven wickets and then managed two draws to clinch their first overseas series triumph. After putting Pakistan in to bat, Streak and Henry Olonga took control and sent the hosts packing for 296. Neil Johnson scored a ton for Zimbabwe, but that wasn’t enough for them to take a lead as they were bowled out for 238. But, Olonga and Mpumelelo Mbangwa sparked a collapse that saw Pakistan score only 103. Chasing 162, Zimbabwe made no mistake as they got home with seven wickets in hand. Murray Goodwin anchored the run-chase.

One of the biggest upsets in World Cup history. Though Zimbabwe were a competitive side, not many expected to pull off this victory. The opposition was dented by the absence of Sachin Tendulkar, who had to fly back to Mumbai due to the death of his father. India put Zimbabwe in to bat and they scored 252, with Andy Flower leading the way with 68 not out. Though India slumped to 56 for three, they seemed in control with Sadagoppan Ramesh anchoring the innings. There was a stutter in the middle as India were reduced to 175 for six. Robin Singh battled on and took India to 246 for seven when Olonga dismissed him for 35. India scored only three more runs as Olonga bowled Javagal Srinath and then trapped Venkatesh Prasad to clinch a thrilling three-run victory.

Another upset at the 1999 World Cup caused by Zimbabwe. This time, their neighbours were the victims. If none expected the win over India, they would have completely written Zimbabwe off against the Proteas, given their form. However, Johnson set the tone with an innings of 76 as Zimbabwe put up 233 on the board. Johnson wasn’t done there as his seamers were in play, combining with Streak to form a lethal combo. By the 12th over, South Africa were reduced to 40 for six. Shaun Pollock and Lance Klusner fought, with both scoring fifties, but it was too much for them. Zimbabwe sailed into the Super Sixes of that tournament and enhanced their reputation in world cricket.

A remarkable victory by all means! It is a forgotten ODI and should rank as one of the finest in the history of the game. New Zealand setup a target of 274 and the game looked gone when Zimbabwe were 64 for five in the 16th over. Andy Flower continued to wage the battle with some support from Dirk Viljoen. But, he fell with the score on 146 in the 30th over, which brought Streak to the crease. Andy Flower fell for 81 seven overs later, but Streak was in the form of his life. He smashed the ball to all parts of Eden Park, knocking five sixes and four fours. As Zimbabwe approached the total, they wobbled and were nine down with 19 to get. But, Streak was undeterred and ensured victory with eight balls to spare.

It was Douglas Marillier’s game! The other details are immaterial! India had scored 274 and were on course to victory when Zimbabwe were reduced to 210 for eight in the 45th over when Marillier walked out in a hopeless cause. Marillier then commenced a remarkable fightback. Walking across his stumps, he fearlessly scooped fielders very fine. This was perhaps the genesis of all the innovative strokes we have seen in modern times. Zaheer Khan and company had no answer to this new phenomenon. Within three overs, he had taken the score above 250 when Tatenda Taibu was dismissed. Gary Brent held on at one end as Marillier continued to unnerve the Indians and sealed victory with two balls to spare. He finished with an unbeaten 56 off 24 balls, which featured 10 fours and one six.

The shortest format had its first major upset! The then 50-over World Champions came into the tournament with almost the same side, with high expectations. However, Zimbabwe stunned them with a disciplined performance. Matthew Hayden was dismissed in the very first over and Australia kept slipping through the innings. Some cameos ensured they put up 138, a score that didn’t look enough although they were up against a weak side. Brendan Taylor then anchored Zimbabwe’s innings. Though Australia picked up a few wickets to keep themselves in the hunt, Taylor was calm and determined to stay right through. Needing 12 off the last over, Taylor swept the first ball from Nathan Bracken for four and then picked a few more runs. With four needed off two, the ball hit Taylor and went through the leg-side for four leg-byes to give Zimbabwe a famous win.

New Zealand had won the three-match series with victories in the first two and this was a dead rubber. But, the Kiwi batsmen were on a mission, smashing 328. Ross Taylor smacked 119 and Kane Williamson got 100 off only 69 balls. Though Zimbabwe lost Vusi Sibanda early, Taylor and Taibu built a solid stand and scored at a very good rate. However, at 183 for five in 30 overs, New Zealand were favourites. That was when Malcolm Waller and Elton Chigumbura got together. The pair added 95 in the next 14 overs before Chigumbura was dismissed. Waller saw it through  and despite batting with the last man, he ensured victory in the last over. Waller remained unbeaten on 99.

A win that raised hopes for the Zimbabwe fans. With Test matches being played few and far in between, Zimbabwe hoped for the best in this contest. In the first Test, Misbah-ul-Haq’s men emerged victorious by 221 runs. The pressure was on Zimbabwe when they chose to bat in the second Test at Harare. They managed to score 294. However, it as the bowling that took centre-stage with Tinashe Panyagara and Brian Vitori combining to bowl Pakistan out for 230. With a 64-run lead, Zimbabwe could have set a high total, but they were bowled out for 199. Needing 264 runs to win, Pakistan wobbled with many batsmen getting starts but failing to convert them. Misbah remained the lone warrior as wickets fell at the other end. He was left unbeaten when a mix-up led to a run-out, which gave Zimbabwe a victory.

Zimbabwe had squandered an opportunity to beat South Africa coming into this game against Australia. The tourists had their own share of worries, but Michael Clarke’s return was a huge positive going into this game. Zimbabwe doled out a heavy dose of spin that left Australia in trouble. Clarke’s fifty brought in some stability and some late hitting by Brad Haddin took the score to 209. At 100 for two, Zimbabwe were on course before the bowlers brought them back with a flurry of wickets. But, with 54 needed to win Prosper Utseya joined Chigumbura and they constructed a spirited stand, with responsibility and aggression, to seal the deal for Zimbabwe. Utseya sealed the game with a six to spark celebrations in a packed Harare Sports Club. 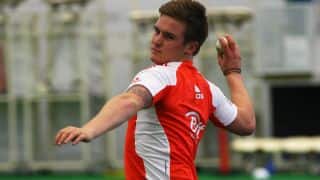 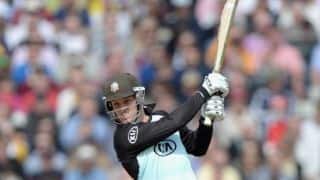