Good day for India in tennis as Sanam Singh, Yuki Bhambri and Ankita Raina reached the pre-quarterfinals men’s and women’s singles tennis competition of the 17th Asian Games at the Yeorumul Tennis Courts on Thursday.

Bhambri, who in the absence of defending Asiad champion Somdev Devvarman, is the top-seeded Indian in the competition will face 13th seeded Indonesian Christopher Benjamin Rungkat in the next round.

Sanam Singh strolled to a 6-1, 6-2 straight sets win over Abdulhameed Alshatti in just 48 minutes to book his place in the pre-quarters.

The 10th seeded Indian took 25 minutes to finish the first set 6-1 and was just as ruthless in the second winning 6-2 in 21 minutes. Sanam will take on sixth seeded South Korean Hyeon Chung in the pre-quarters. 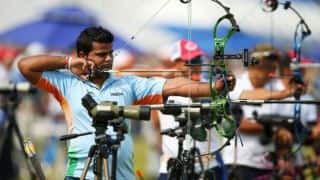