Two-time champions India will be facing arch-rivals and defending champions Pakistan in the mouth-watering title-clash of the Asian Games men’s hockey final slated for Thursday.

While India edged past hosts South Korea 1-0 and stayed on course for their first Asian Games gold medal in 16 years, Pakistan had to fight hard for a 6-5 win in the penalty shoot-out against Malaysia after the match ended goalless in the regulation time here Monday.

In the title-clash, India and Pakistan will not only fight it out for the gold medal but also a direct qualification for the 2016 Rio Olympics. India have a poor 1-7 record against eight-time champions Pakistan in the final of the Asian Games. The only time India managed to beat Pakistan was in the 1966 Bangkok Games.

It was a solitary strike by Akashdeep Singh that helped India beat hosts South Korea 1-0 in the semi-finals at the Soenhak Hockey Stadium and qualify for their first final in 12 years. India not only stayed on course for a possible third gold medal but are also eyeing a direct berth for the 2016 Rio Olympics if they emerge champions here. India last made the final in 2002 when they were beaten by South Korea.

In the title-clash India will be playing the winner of the other semifinal between holders and record eight-time champions Pakistan and Malaysia. India, who had last won the gold medal in 1998, upped their game when it mattered the most and put on a fine show against the hosts, who had won the gold medal on four occasion.

Having been beaten by India in the bronze medal play-off match in 2010 Guangzhou, South Korea were determined to take revenge. And it was evident on the field that both India and South Korea would not leave any stones unturned to claim a berth in the final.

Both the teams played an exciting game that saw a powerful mix of attack and defence. None of the teams let each other to cash in on any opportunities and open the goal account as the first two quarters remained barren.

The deadlock lasted till the 43rd minute, when forward Akashdeep Singh sneaked his way into the opponent’s D and pierced in a field goal to open the account for India in the 44th minute, which proved to be the winning goal for his team.

In the last 15 minutes, India tried their best to hold on to the lead and qualify for the final. South Korea were desperate to sneak in the equaliser and also came close when they earned a penalty corner in the 58th minute. But India goalkeeper P.R.Sreejesh stood like a rock and denied South Korea any hope of getting back into the match. Chief coach Terry Walsh said he was pleased to see the way these boys have played.

“It was an important match and they played according to the strategies planned as well as keeping themselves calm and composed and did not leave any space for error. The whole team is excited to be the first contenders in the final and to have achieved our goals in the tournament as planned till now and our next goal is to win the final and book the berth for the 2016 Rio Olympics,” he said.

India were champions in 1966 and 1998 and finished runners-up on nine occasions. They have also won two bronze medals — the last coming in the 2010 edition. 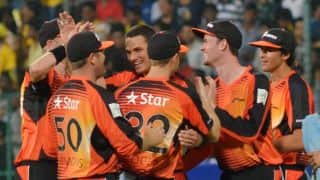