The star of the day was Ghosal, who outclassed two-time Asiad gold medallist Ong Beng Hee.

A silver, which could become gold, was confirmed for Ghosal, who could improve his and India’s best-ever silver to gold by winning his title match against a far lower-ranked opponent from Kuwait, Ahmad Khaleel Ahmad, in the final Tuesday.

The shooters, who raised expectations with a superb haul at the Glasgow Commonwealth Games, faced far superior opposition here and were left behind in the race as only the women’s 25m pistol team comprising Rahi Sarnobat, Anisa Sayyed and Heena Sidhu managed a bronze.

A little before Ghosal’s efforts, 23-year-old Dipika was outplayed by World No.1 Nicol Ann David of Malaysia, who is looking for her fifth Asian Games gold at the age of 31. Nicol won 11-4, 11-4, 11-5 in less than 25 minutes but Dipika did win a bronze, the first individual medal for a woman squash player from India.

The star of the day was Ghosal, who outclassed two-time Asian Games gold medallist Ong Beng Hee of Malaysia 11-9, 11-4, 11-4 to book a place in the final. Ghosal, a bronze medallist in 2006 and 2010, is looking to become the first Indian squash player to win a gold after already having become the first to make the final.

In the men’s Sanda -60 kg quarters, World No.9 Grewal defeated Abdullah of Pakistan 2-0 to enter the medal round. He will face Philippines’ World No.3 Jean Claude Saclag in the semi-final Tuesday.

In women’s quarter-final, Sanathoi downed Mongolia’s Amgalanjargal Sangidorj 2-0 to confirm at least a bronze in the Sanda -52 kg category. World No.5 Sanathoi will take on China’s Luan Zhang in the semi-final Tuesday.

In shooting, Rahi, still recovering from an elbow injury suffered last year, did get to the individual final after finishing eighth in qualification but was then the second to be eliminated and left back in seventh place.

Similar was the fate of 10m air rifle shooter Ayonika Paul, who after being third in the qualification was eliminated early in the final and ended seventh. But she did not even have the consolation of a team medal as the air rifle team ended sixth.

In other action, the Indian men’s basketball team outplayed Kazakhstan 80-61 to top Group B at the Asiad basketball. The Indians lost a hard fought match against Saudi Arabia 67-73 Sunday.

There was disappointment for the tennis teams as both men and women lost to Kazakhstan in the team quarter-finals. Sania Mirza did not play the women’s team event and is slated to appear only in the individuals. 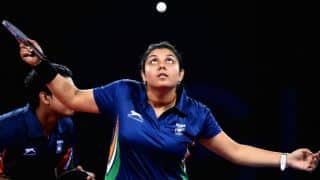