In their next match Sharath-Amalraj will play Japan's Koki Niwa and Kenta Matsudaira.

Indian men paddlers advanced to the doubles pre-quarterfinals after winning their respective matches of the 17th Asian Games at the Suwon Gymnasium on Tuesday.

First up, the pair of Achanta Sharath Kamal and Anthony Amalraj dropped the first game before winning 3-1 (6-11, 11-5, 11-8, 12-10) over the Nepalese duo of Purshottam Bajracharya and Amarlal Malla in 20 minutes.

In their next match on Wednesday, Sharath-Amalraj will play Japan’s Koki Niwa and Kenta Matsudaira, who beat Saudi Arabian combine M. Ali Noor Alkhadrawi and A. Saeed Akram Alghamdi 3-0 (11-8, 11-9, 11-7).

However, the mixed doubles team of Amalraj and Madhurika Patkar was eliminated from the pre-quarterfinals. The Indian pair lost 1-3 (5-11, 13-11, 8-11, 4-11) in 23 minutes to Japanese pair of Seiya Kishikawa and Ai Fukuhara. Amalraj-Madhurika weren’t allowed to settle down in the first game, losing 5-11.

They fought back to win the second game 13-11, which involved numerous long rallies. However, the Indian pair failed to sustain their momentum and lost 8-11, 4-11 in the next two games to exit the competition. With the defeat, India’s campaign in the mixed doubles table tennis category ended as the other team of Sharath and Poulomi Ghatak lost in the second round match on Monday. 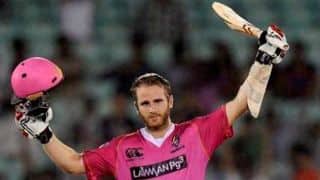