Indian weightlifters began their Asian Games campaign on a disappointing note as all three participating contestants finished at the bottom half of the table in their respective categories in both men’s and women’s divisions at the Moonlight Festival Garden Weightlifting Venue here Saturday.

In the women’s 48 kg category, Khumukcham Sanjita Chanu and Saikhom Mirabai Chanu, the gold and silver medallists at the Glasgow Commonwealth Games, finished 10th and ninth respectively out of 13 lifters.

Sukhen Dey, another Commonwealth Games gold medallist, finished 12th among 14 lifters in the men’s 56 kg category. Sukhen ended fifth in his group of six lifters with a total of 242 kg (106+136). 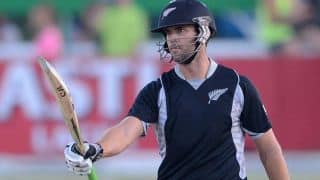 James Franklin out as Tridents lose fourth wicket for 124 runs