The Indian eves dished out a spirited display before losing 1-3 to hosts South Korea.

The gold medal already out of their grasp, Indian women’s hockey team will be eyeing to return at least with a bronze from the 17th Asian Games when they take on Japan, in what can be regarded as a revenge encounter, in the third-fourth place play-off here on Wednesday.

The Indian eves dished out a spirited display before losing 1-3 to last edition’s silver medallist Korea in the semifinal on Monday at the Soenhak Hockey Stadium. But come tomorrow, the Ritu Rani-led side will be eager to leave behind the semi-final defeat as they have one last chance to finish on the podium. But for that to happen they will have to overcome Japan against whom they lost in the bronze medal play-off fours years ago in Guangzhou.

The Indians eves have a golden opportunity tomorrow to avenge upon their narrow 0-1 loss to Japan in the 2010 Asian Games to miss out on a bronze medal. The match against Japan will also provide the Indians a chance to better their fourth place finish in the Guangzhou edition of the Games.

The Indians eves, however, will have to utilise their chances more if they desire to beat Japan tomorrow. Against Korea on Monday, they created numerous scoring opportunities but what did them in was their finishing.

India’s chief coach Neil Hawgood too emphasied on the fact when he said that they can’t afford to let off scoring chances. “In the previous match, we created enough chances in the last half of the game but unfortunately, we failed to materialise those chances. Now, we have shifted our focus on Japan. If we start well and pull out our best in the last two quarters as well as we did against Malaysia, we will have a very good chance of beating Japan for the first time in two years,” Hawgood said. 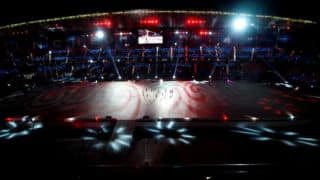