All three wrestlers failed to finish on the podium.

After a fine performance by India in the freestyle category, the Greco-Roman grapplers did not have the kind of start they would have liked as all three wrestlers fighting on the day failed to finish on the podium in the Asian Games on Tuesday.

Krishankant Yadav had a great opportunity to finish third on the podium but he went down to Iran’s Saeid Abdvali 0-3 in the bronze medal play-off round in men’s 71kg Greco-Roman wrestling. The Iranian was by far the more dominant of the two as he grabbed three quick points to lead 3-0 after the first half.

In the second half, he earned three more points to leave the Indian with no chance of making a comeback. At the end of the match, the grappler from Iran made it 6-0 to clinch the bronze medal. Earlier, two more Indians in the fray — Ravinder Singh and Harpreet Singh — lost their respective quarterfinal bouts to crash out of the tournament.

While Ravinder was defeated by Kazakhstan’s Almat Kebispayev 0-3 in a ‘decision by points’ verdict in the the 59kg category, Harpreet lost 1-3 to Uzbekistan’s Saldadze Besiki in 80kg division. Even Yadav had lost his quarterfinal bout after going down to Jung Ji-Hyun of Korea 4-0 (Great Superiority), but he got lucky to make it to the bronze medal round as his opponent reached the final. 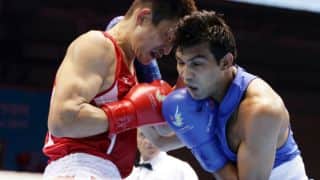