Sandeep Kumar and Basanta Bahadur Rana were 4th and 5th.

Sandeep Kumar and Basanta Bahadur Rana failed to add to India’s medal tally as they finished fourth and fifth in the men’s 50km race walk event of the 17th Asian Games on Wednesday. Sandeep Kumar and Basanta Rana were sixth and seventh — the final two places — before Japan’s Yuki Yamakazi was disqualified with five kilometres remaining, moving them one place up.

Zhang Lin of China, who was in fourth position till the 40th km, started tailing off in the final 10. It was his compatriot Wang Zhendong who overtook him first to move into third place with five kilometres remaining. The Indians also took advantage of the slowing Chinese and leapfrogged him to take fourth and fifth.

But fourth placed Sandeep was still almost nine minutes behind Wang Zhedong in third placed and failed to bridge the gap for a podium finish. Basanta Rana finished a further seven minutes behind his compatriot. Takayuki Tanii of Japan took the gold while Chilsung Park of South Korea finished with the silver. 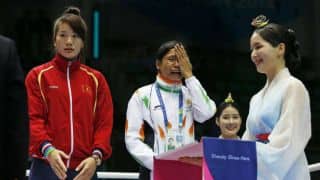