Indian shuttlers had a dismal day in office as Saina Nehwal, Parupalli Kashyap and Kidambi Srikanth were knocked out of the 17th Asian Games here Friday.

While Saina lost her women’s singles quarter-finals match, Kashyap and Srikanth went out from the men’s singles pre-quarters. Later, Manu Attri and N. Sikki Reddy were also knocked out of the mixed doubles Round of 16 at the Gyeyang Gymnasium here.

Sixth seed Saina had to once again suffer defeat at the hands of old rival Yihan Wang of China as the second seed marched into the semis with a 18-21, 21-9, 21-7 victory in exactly an hour. Out of their previous nine meetings, the former World Champion had won eight times while the only time the result went in favour of Saina was when Yihan retired. Saina looked at her prime in the first game, taking it in 25 minutes. This was the first time since 2011 that the Hyderabadi took a game against the former World No.1.

However in the second game, the Olympic silver medallist totally turned the tables on Saina as she romped home to level the contest in only 18 minutes. The procession continued as the World No.3 Chinese took a minute less in the decider to close the encounter on her first matchpoint with a precise cross court smash.

Earlier, Kashyap was knocked out when he lost his men’s singles pre-quarterfinal to World No.1 Lee Chong Wei of Malaysia. It was a tough outing for the reigning Commonwealth Games champion who has never even won a game, let alone a match, against the top seeded Malaysian in four previous meetings. Chong Wei needed only 34 minutes to move past the Hyderabadi, winning 21-12, 21-11.

Srikanth also went out when he lost to local World No.7 Son Wan Ho, going down 21-19, 11-21, 18-21 in an hour and seven minutes. Though the World No.22 Indian had beaten the fifth seeded Son in their first two meetings, the South Korean had defeated the Indian the previous occasion they played at the Thomas Cup in New Delhi in May.

India’s last medal hopes from the discipline, B. Sumeeth Reddy and Attri will play their men’s doubles quarter-final later in the day. 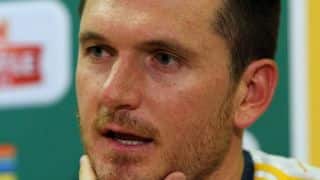