The Manipuri will now meet Zhang Luan of China in the semifinals tomorrow.

Wushu player Thoudam Sanathoi Devi today assured herself of at least a bronze in women’s Sanda 52kg category after storming into the semi-finals on the third day of competitions at the Asian Games here today.

Sanathoi beat Amgalanjargal Sangidorj of Mongolia in a 2-0 ‘Win By Round’ (WBR) verdict in a dominating performance in her quarterfinal contest here at Ganghwa Dolmens Gymnasium here.

The Manipuri will now meet Zhang Luan of China in the semifinals tomorrow.

Sanathoi will be the third Indian to have won a medal in wushu in the Asian Games while her medal will be the fourth won by the country in the history of multi-sporting event. 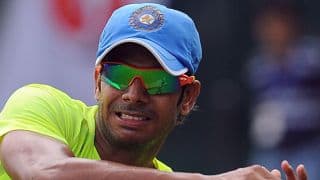