Auckland: Indian mixed doubles pair of Manu Attri and Ashwini Ponnappa advanced to the main draw of the USD 120,000N ew Zealand Grand Prix Gold at the North Shore Events Centre here today. Manu and Ashwini dismissed local pair of Niccolo Tagle and Deborah Yin 21-10 21-11 in the second round, after Christopher Steeghs and Erena Calder-Hawkins retired in the opening match of the qualifiers. Manu and Ashwini will next take on Australian combo of Robin Middleton and Leanne Choo in the main draw.

Manu will also pair up with B Sumeeth Reddy when the World No. 19 take on Shang Kai Lin and Lu Ching Yao of Chinese Taipei. Fourth seeds Jwala Gutta and Ashwini got a bye in the opening round and will take on the winners of the match between Japan’s Mayu Matsumoto and Wakana Nagahara and local pair of Maria Masinipeni and Jasmin Chung Man Ng. Pranaav Jerry Chopra and N Sikki Reddy will take on Australia’s Jonathan Sun and Jennifer Tam in another mixed doubles match. Another men’s doubles pair of Pranaav and Akshay Dewalkar will meet local combo of Joshua Curry and Maoni Hu He. 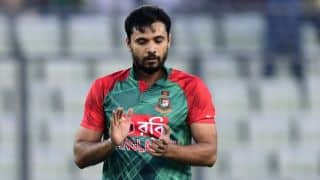