Kunshan (China): Indian shuttler Ajay Jayaram’s valiant fight went in vain as the country’s badminton team (men’s) lost 2-3 to Thailand in their lung-opener at the Thomas Cup badminton tournament here on Sunday. Jayaram did not get off to the start he wanted and had to play catch-up for much of the contest. Though he won the second match, he had to surrender the tie against Thailand’s Tanongsak Saensomboonsuk 16-21, 21-12, 14-21 in 46 minutes. Olympic-bound men’s doubles pair of B. Sumeeth Reddy and Manu Attri next came out second best against Thailand’s Bodin Issara and Nipitphon Puangpuapech losing the tie 17-21, 6-21 as India slumped to a 0-2 deficit.

It needed a brilliant effort from B. Sai Praneeth in the men’s singles encounter to light Indian hopes again as the Hyderabad born player grabbed a 21-11 21-16 win against Khosit Phetpradab in 36 minutes to make it 1-2. But in the second doubles, Satwiksairaj Rankireddy and Akshay Dewalkar lost 15-21, 21-14, 15-21 to the Thailand duo of Puavaranukroh Dechapol and Kedren Kittinupong. The fixture lasted for 56 minutes after which Thailand took an unassailable 3-1 lead and the fifth contest between Sourabh Varma and Adulrach Namkul became inconsequential. Verma beat Namkul 21-17, 16-21, 21-19 to reduce the margin of defeat.

Earlier, Jayaram surged to a 7-5 lead in the opening match but Tanongsak broke the India at 8-8 and eventually bagged it. Jayaram made a strong comeback and took the second game quite easily. But in the decider the World No.21 looked tired and Tanongsak used it to his advantage. India will lock horns against Hong Kong on Tuesday. 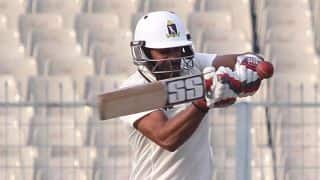