Barca's jersey colours include the traditional red and blue with lighter shades of the same hues.

FC Barcelona announced on Monday their new 2016-17 season’s jersey, which has the same design as the team’s shirt featured in the Champions League final of 1992 at Wembley stadium in London, where the Catalan football giants won their first Champions League trophy after defeating Italian club Sampdoria 1-0. According to the club’s website, the jersey colours include the traditional red and blue with lighter shades of the same hues, reports Efe. “Thinner tonal stripes taper near the hem in a style that honours the model worn by the team in the 1991/92 season, when the club won its first ever European Cup at Wembley,” the club explained.

The design of the shirt has references to the team’s achievements. “Barca” is knit into the back collar alongside a small woven Catalan flag, the Senyera, which Barcelona fans recreated with large yellow and red cards in the stands on the night of the club’s 1992 European victory in London.

“Un Crit” and “Valent” which together mean “Our Cry is Bold” in Catalan, adorn the inside right and left cuffs. Gabba to host Test cricket for next 3 years 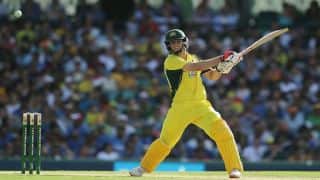