Cristiano Ronaldo: I had a vision of scoring the winning goal in UEFA Champions League 2015-16 final

Cristiano Ronaldo: I had a vision of scoring the winning goal in UEFA Champions League 2015-16 final

Cristiano Ronaldo said he had a vision that he will score the winning penalty in the Champions League final.

Milan: Having handed Real Madrid their 11th European title by converting the decisive attempt during the penalty shootout, star forward Cristiano Ronaldo said he had a vision that he will score the winning penalty in the Champions League final. Real were locked 1-1 with fellow Spanish outfit Atletico Madrid at the end of extra-time of the Champions League final at the San Siro Stadium here on Saturday evening. Sergio Ramos handed Real Madrid the lead in the first half. But Atletico produced a typically gritty performance with Carrasco finding the equaliser with a header off Juanfran’s cross.

During the penalty shootout, Juanfran missed his attempt for Atletico, as Ronaldo blasted home the decisive spot kick, sparking wild celebrations among the Real Madrid players and fans. “I had a vision and saw I was going to score the winning goal, so I asked Zinedine Zidane to take the fifth penalty,” Ronaldo was quoted as saying by Sky Sports. “It is a very special moment, and it is well deserved for the players and the fans, who’ve always been there for us,” he added.

Ronaldo has now won the Champions League three times while Real Madrid manager Zidane is only the seventh man to win Europe’s premier club competition both as a player and a coach. “Zidane has done a phenomenal job and he deserves it because he’s a gentleman and is humble, so I’m happy for him,” Ronaldo said. The 31-year-old Portugal star felt that Real Madrid held the advantage due to their superior experience and were able to control their nerves better during the penalty shootout. “The penalties are always a lottery, you never know what’s going to happen, but we showed that our team had more experience and we showed that we scored all penalties – it was unbelievable, a fantastic night,” Ronaldo said. Red Bull, Toro Rosso to use Renault engines for 2 years 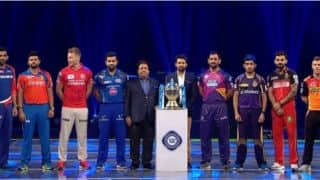