London: Manchester United manager Louis Van Gaal believes that his current team is better than the last season’s and is hopeful to end the season with a title despite having a lengthy injury list. “I think this team is better than last year’s, but we don’t get the benefit of that because we have had so many injuries,” the Dutchman was quoted as saying by goal.com. United were forced to play with youngsters like Marcus Rashford, Cameron Borthwick-Jackson and Guillermo Varela at the expense of experienced players, who were ruled out due to injuries.

Van Gaal said that it would be fantastic if his side would manage to secure Champions League qualification through Europa League. “Every week we have a big problem. So to reach our aim to be in the Champions League, it would be fantastic, and it would mean my staff will have done fantastically well,” he added. The 64-year-old , however, admitted that making top four Premier League finish still remain their aim, but added that they would also try to add a trophy to their cabinet by winning a Europa League.

Van Gaal’s side are currently on the verge of the Premier League top four following their recent wins over Arsenal and Watford. They also remain active in the FA Cup and the Europa League. United, which are standing fifth in the league table, will play their next match against West Brom on Sunday. 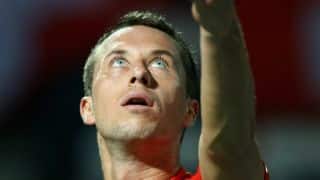