Turin: Now we know: Football is not just a game. It is a battle, a battle of tactics, systems, passion, brilliant coaches like Massimiliano Allegri and Pep Guardiola, and their outstandingly educated performers on the pitch. What else was this thrilling 2-2 draw in the round of the last 16 of the 2015/2016 Champions League between Juventus and Bayern Munich? It delivered extreme speed, tactical variety and excitement. It was a thriller, a pulsating game of chess and world class football, all in one here on Tuesday night. Juve seemed to be beaten after Bayern went 2-0 up (Thomas Mueller 43rd minute, Arjen Robben 55th). Bayern were pegged back by Paulo Dybala (63rd) and Alvaro Morata (76th) after what had been a one-sided game, reports Xinhua.

The 2-2 draw now might be seen as a failure for Bayern, maybe it must be seen as that after they gave away a two-goal lead. But is it a failure in the end? After all, having scored two goals in an away game usually is an advantage. Maybe the draw only means that Bayern did not manage to make things clear after 90 minutes and now need a second game on March 16 in Munich to finish the job. No matter how you see things, the result of the first leg leaves all the doors open to Bayern and Guardiola to find a happy end to the 45-year-old Spaniard’s three-year reign in the Bavarian capital.

Since announcing his departure for Manchester City next summer, Bayern’s team and their headstrong coach were regarded to be no more than a community forced upon one another by a common goal. It is usually a construction devoid of true passion or other signs of life. Sweeping away most of the conclusions, the 2-2 draw now can also be seen as a convincing answer. Meaning: With a soon-to-depart Guardiola in charge, Bayern still holds a threat to its European opponents and more.

After two failed attempts (defeats against Real Madrid and Barcelona in two one-sided semifinals), and accompanied by much Bavarian bitterness, Guardiola’s era could well end with Bayern winning the Champions League, but only when Bayern’s injured key-players (especially the ones in defense) return. Without Jerome Boateng, Holger Badstuber and Javier Martinez, Bayern does not seem to be strong enough when the competition gets to the sharp end, at least should they have to face the Spanish giants again. Without the back-row key players Bayern is not able to deliver a perfect game.

No doubt, Bayern could well have decided the game they dominated for 76 minutes but gave away as they could not match Juve’s power play in the last 15 minutes. The questions now are was it because Guardiola is leaving in a few months time? Or, because Bayern had to substitute their defensive king-pins? A lot of positive thoughts in the minds of Juve’s players, a lot of frustration in the Bayern’s.

What was the initial situation at kick-off? On the one hand there was Juventus Turin, Europe’s top team when it comes to dead-all situations, with an outstanding ability to change tactics within a game several times and to counter attack at speed. On the other, Bayern Munich, loving to dominate a game, attacking like a nasty insect down the flanks with a central striker in Robert Lewandowski who is akin to a scorpion with a deadly sting.

And alongside him is a genius who appears like a mad professor doing things nobody on earth would expect, Thomas Mueller. Behind them, rock-solid in defense are tall athletes controlling the air-space in front of their goal. This time though the tall, strong defense was missing as Boateng, Badstuber and Martinez were sidelined due to injury and had to be replaced by man nowhere near as tall in the 21-year-old and relatively inexperienced Joshua Kimmich. Meaning Bayern coach Guardiola had to rethink his strategy. He team had to try to avoid dead-ball situations and opponents coming too close to their goal. But how? Pep Guardiola himself said, “Every team is better in the air than we are.”

The answer Guardiola thought of for the game in Turin was obvious the right. Bayern dominated the game going forward at all times and had up to 71 percent of possession in the first half. Strong man-on-man, Bayern made up for the absence of its regular defensive line-up using quick short passes to keep up the speed in order to prevent their opponents from getting hold of the ball. Arturo Vidal, transferred from Juve to Bayern last summer, was particularly effective. It worked well in the first half, maybe better than expected. Call it a goal at the right moment when Mueller put them ahead just before halftime. Being forced into their half was nothing Juve was unduly worried about.

Facing Bayern’s expected tactics, the Italians were counting on fast counter-attacks but did not make enough of their rare opportunities for a long time. Bayern`s dominant game for long appeared like a straightjacket. In the end, for a decimated Bayern team, it was not enough to win. 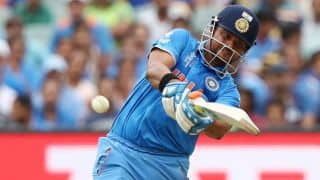