T20 cricket is often witness to some magnificent fielding efforts. In the IPL 2015, Dwayne Bravo stood out with his all-round fielding skills.

Chasing 158 to win, Shane Watson was holding the Rajasthan Royals innings together. They were 63 for two in the 10th over when Watson decided to have a go at Ravindra Jadeja. He smashed it towards long-on where Bravo ran across jumped in the air with both his hands outstretched. He held it one handed, landed back and managed to hold his balance inside the field of play. This was yet another magnificent piece of athleticism by Bravo, who would invariably break out into a celebratory jig upon pulling off such stunners.

When Chennai Super Kings won the toss and elected to bowl first in the final against the Mumbai Indians, many were sceptical about the decision. In the end, it turned out to be the wrong call, but Faf du Plessis’ magnificent start gave them the early confidence. Eager to get off the mark in the first over, Parthiv flicked one to mid-on and set off. Du Plessis ran across, picked up the ball and tumbled. As he was falling, he nonchalantly released the ball, back-handed, towards the stumps and hit the top. Parthiv was found short!

3.  Dwayne Bravo’s one handed catch, inches off the ground

As Chennai were strangling the Kolkata Knight Riders, Suryakumar Yadav tried to smash one down the ground. Bravo ran in from long-on, dived forward and took it one handed, inches off the ground. What made it tough was that du Plessis had made a sprint from long-off and had almost come in Bravo’s path. Bravo wasn’t deterred as he dived forward. And, as the ball died on him, he had it with one hand, although it seemed as if he had made an attempt to get it with both.

Go back to the 1980s, when Roger Harper ran out Graham Gooch in the MCC Bicentennial Match between the Rest of the World XI and the Marylebone Cricket Club (MCC). Bravo fashioned an encore during Chennai’s home game against Bangalore. Virat Kohli played out a full delivery, which got bounced off the surface. In his follow through, bravo leapt to his right, held the ball one-handed and threw it back at the stumps, finding Kohli short as he had walked out. Kohli tried his best to get back, but in vain. Perhaps Bravo’s effort was better than Harper’s because he is a medium-pacer and his reaction time would have been lesser.

In Rajasthan’s clash against Bangalore, James Faulkner was trying to get a few quick runs. He walked across the stumps to Harshal Patel and tried to scoop it fine. However, he only managed a tickle down the leg-side. Dinesh Karthik threw himself to his left and took it one-handed. What made it difficult was the element of surprise. Karthik would have expected Faulkner to hit it more square or in the air. Instead, it was closer to him and came sharply. Also, he was blinded by the stumps and the batsman himself while he hit it.

Chris Gayle was taking his chances against Mumbai at the Wankhede. In trying to smash a few around, he gave a couple of chances early, which weren’t taken by the Mumbai fielders. However, Lendl Simmons then produced a moment of brilliance at short third-man. Gayle tried to hit it over him and point to get four. However, Simmons moved across to his left, and took the ball in the air. It was almost past him as he did that, but held it magnificently.

Corey Anderson was promoted to No. 3 when Mumbai lost the early wicket against Chennai. He tried to flat-bat one over mid-off to break the shackles, but did not hit it well. Du Plessis ran from mid-off, jumped in the air and took it with both hands, above his head. It was spectacular because the ball was travelling at an angle, which du Plessis had to intercept side-on. It not only speaks about his athleticism but also his magnificent ground awareness.

Rajasthan were strangling the Kings XI Punjab in a run-chase at Pune. George Bailey was the lone warrior for Punjab through the mess and was trying to salvage some pride by getting them as close to the total as possible. He smashed James Faulkner to cow-corner. Tim Southee ran across from long-on, held it one handed and realised that he was going over the fence with the momentum. He just flicked it back into play, noticing Karun Nair in position from the corner of his eye. The flick wasn’t perfect and Nair had to dive to his right to take a good catch. If only a catch could be credited to two fielders!

Back in 2013, Ricky Ponting pulled off a stunner at cover for the Mumbai, a catch that lingers in memory. Warner produced something similar against the Bangalore this year. Mandeep Singh, facing his first ball, was trying to get off the mark. However, he got an edge to cover. Warner flew across to his right, and held the ball, one-handed, with some airtime! No wonder, Warner is known as one of the best fielders in the world. It is a pity that his elementary mistake in the later stages cost the Sunrisers Hyderabad.

Did this cost Hyderabad a spot in the playoffs? Warner may never forgive himself for this error. Coming from a brilliant fielder like him, it was certainly shocking. In a six-over chase, Bangalore were led by Virat Kohli, who anchored them and was smashing it around. With four needed off the last two balls, Kohli hit it to long-off, where Warner ran back, took it and immediately pumped his fists. However, he had stepped on the ropes then and tried to flick it back in vain. That was the thin line between agony and ecstasy. 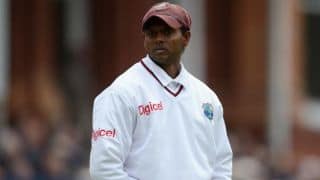 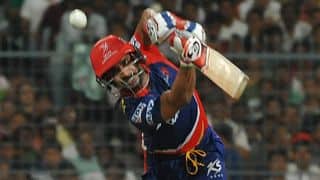