Take a look at such batsmen who played the game with an unusual batting stance.

The wonderful game of cricket has been blessed with some exceptional batting talents over the years. Right from the era of Sir WG Grace to the Don Bradman era to the Sunil Gavaskar one and to the more recent era of Sachin Tendulkar and Virat Kohli, the game has seen some phenomenal players play with poise and elegance. While some of these greats had a near-perfect, flawless batting stance, some other had unorthodox style of batting. Today we take a look at such batsmen who played the game with an unusual batting stance. Chinmay Jawalekar has penned down the list of 11 such players who are best remembered for their weird stances. Also Read: 10 bowlers with unusual bowling actions in cricket

1. Shivnarine Chanderpaul: One of the greatest West Indies cricketers and most-capped player for them in Tests, Chanderpaul perhaps had the most weird-looking batting stance. He had a front-on stance, wherein he stood with his chest facing the bowler and bat resting in front of his legs. Both his eyes would firmly be stationed on the bowler every time he came running in. He stood at a 90-degree-angle to the normal batting position. The cricketer however never had any issue with his unusual stance, as it helped him score tons of runs, 30 Test hundreds and walk away with an average over 50.

2. Kevin Pietersen: Another modern-day batting great, Pietersen too had an unusual batting stance and technique. Whenever he came out to bat, Pietersen would stand at the crease with his feet wide apart from each other and played with a high backlit. The distance between his legs would be so much that a small-sized vehicle may easily pass through the gap. Further, he would keep shuffling and walking across the pitch, making it all the more difficult for the bowlers to bowl at him. Also Read: 10 famous and funny celebrations by bowlers in cricket

3. Lance Klusener: The original finisher of limited-overs cricket, Lance Zulu Klusener too had an unusual batting stance. His baseball-like batting position did earn him lot of accolades as he accumulated runs at will. He would stand with his bat going as high as his shoulders and then clobber the ball with his club-like bat. The high back-lift that he had allowed him to hit freely. However, once the bowlers found him out and decoded his batting style by finding chinks in his armour, his career graph only went downhill and gradually one of the brightest stars faded out of international cricket.

4. Steve Smith: Current Australian captain Steve Smith too has a bizarre stance. He stands with a considerable gap separating his feet and keeps swerving his bat. He shuffles and walks across the line before playing a shot and gets them executed, thanks to his high back-lift. At times, Smith ends up irritating the bowlers and even viewers with too much shuffling across. But this batting style has made him the top batsman in the world across formats.

5. Hashim Amla: This run-machine from South Africa too has an awkward looking batting stance, which is highly effective for him. Amla stands with a high back-lift and his bat pointing towards the gully region. But despite this unusual stance, Amla has scored tons of runs across formats and is currently ruling the roost in Caribbean Premier League (CPL).

6. Graham Gooch: Former England batsman and a legend of the game, Graham Gooch can be considered as the pioneer of awkward batting stance, specifically with high back-lift. His stance was simple yet unorthodox, wherein he would stand with his head in the line of off stump and his bat way over his head. He would then walk across to come in the line of ball once it got delivered. It is said that Gooch has left behind the legacy of high back-lift which batsmen of current generation are taking forward.

7. Ijaz Ahmed: This Pakistani batsman had an interesting batting stance, which earned him the nickname of The axe man in the cricket circles. Ijaz was known to use his bat as an axe, positioning it right between his legs and hit the ground as if he was cutting wood. But the same stance helped him amass loads of runs for the different teams he played for.

8. Fawad Alam: Pakistani batsman Fawad Alam also has a Chanderpaul-like stance. The only difference being the gap between the legs, which is more in Fawad s case. His ugly-looking stance allows him to play more freely and get a better view of the ball while it gets delivered from the bowlers hands. Unfortunately, he has never got a deserved longer run in the Pakistani side.

9. Abhishek Nayar: The talented Mumbai cricketer did make it to the Indian team once. But he has been the talked about player not for his all-round skills, albeit for his bizarre-looking stance. The player, also a southpaw, has again Chanderpaul-like wide-footed stance. The notable difference however between their stances is Nayar s crouching posture, which he makes while taking guard. His stance, which has been effective for him all through his career, makes for one of the ugliest-looking stances in the history of cricket.

10. Mike Rindel: Another cricketer from the baseball school of cricket who had an unusual batting stance. Rindel, who opened the innings for South Africa in 22 ODIs, would stand wide outside the line of leg stump with his bat s position as high as over his head. As the bowler would reach to the point of delivery, Rindel would walk across and come in the line of the ball to hit it. His stance and technique attracted lot of eyeballs towards his game, but his career did not go beyond those 22 ODIs.

11. Clayton Lambert: Left-handed batsman Clayton Lambert played five Tests and 12 ODIs in his career which can be divided into two halves; one for West Indies and the other for USA. He changed sides but one thing remained common, his unusual batting style. He had a crouching stance with his feet wide apart and bat resting between them. Lambert would take guard outside the line of leg stump and then walk across as the bowler fired up the delivery. 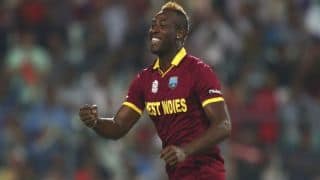