It’s very rare for a bowler to scalp two consecutive five-wicket hauls in One-Day Internationals (ODIs). On Sunday, Bangladesh’s Mustafizur Rahman became the 10th bowler to achieve the feat. Rahman will be hoping to get his third five-for in a row on Wednesday to equals Waqar Younis’ record of three fifers in a row.

Suvajit Mustafi lists the 12 instances when a bowler took five wickets or more in consecutive ODIs.

The Australian left-arm pacer demolished England with figures of 12-6-14-6, as they were bowled out for 93 in the semi-final of the inaugural cricket World Cup at Leeds. Gilmour later scored an unbeaten 28 to help Australia reach the final. In the final, Gilmour yet again produced a superb spell of 12-2-48-5. However, West Indian skipper Clive Lloyd with his hundred spoiled his party as the Caribbean side went on to win the inaugural World Cup.

In the 1983 World Cup, de Mel, the Sri Lankan medium-pacer, had Pakistan reeling at 43 for five at one stage in Leeds. He finished with figures of 12-1-39-5. However, an inspiring hundred from captain Imran Khan guided Pakistan to an 11-run victory. Two days later, de Mel produced another fine spell of 12-4-32-5 against New Zealand at Derby. This time Sri Lanka managed a three-wicket win.

In the 1990 Sharjah Cup, Sri Lankan batsmen found it tough to negotiate Waqar’s pace and swing, as they succumbed to a 90-run defeat. Waqar bowled dead straight as four of his victims were clean bowled, while two were trapped leg-before. He finished with 10-1-26-6. Two days later, it was New Zealand’s time to suffer in the semi-final. This time, Waqar’s figures of 9-2-20-5 restricted the Kiwis to 74 as Pakistan cruised to an eight-wicket victory.

It’s Waqar in the list again. In a span of six days, he picked up 15 international wickets. At Peshawar, his spell of 6.4-2-11-5 against New Zealand guided Pakistan to an eight-wicket victory and in the next game at Sialkot; Waqar produced figures of 6-1-16-5 as his side cruised to a 105-run win, winning the ODI series 3-0. Waqar didn’t stop there. In the first ODI against West Indies which was played three days later in Karachi, he bowled Pakistan to a six-run win against West Indies. Though he gave away 52 from his eight overs in the 40-over contest, he picked up five crucial wickets which included the likes of Desmond Haynes, Richie Richardson, Brian Lara and Carl Hooper.

Aaqib bowled a brilliant spell of 10-1-35-5 against the then world champions Sri Lanka to guide Pakistan to a 30-run win at Gwalior in the second game of Independence Cup. The fast bowler produced a similar feat against the host Indian side at Chennai. He obtained figures of 10-0-61-5. He got the prized scalps of Sachin Tendulkar, Sourav Ganguly and Rahul Dravid.  Pakistan won the game by 35 runs and the match will be best remembered for Saeed Anwar’s 194, which remained ODI’s highest individual score for almost the next 13 years.

In the Asia Cup 1997, wily off-spinner Saqlain claimed figured of 9.3-1-38-5 against Bangladesh as Pakistan walked off with an easy win at Colombo. Two months later, Saqlain played his next game against India at Toronto. Saqlain’s 10-0-45-5, restricted India to 208, however India still managed to pull off a 20-run win.

Sharjah was a happy hunting ground for the Pakistanis and on this occasion Azhar’s devastating spell of 10-2-18-6, bowled the side to a massive 138-win against the Lara-led West Indian side. Three days later, Azhar continued his wonderful form with the ball and this time claimed figures of 10-2-28-5 against the Sri Lankans in the tournament final. Pakistan won by 88 runs and Azhar was again awarded the man-of-the-match.

English batsmen found it tough to negate the swing of Waqar at Leeds, as the Pakistani skipper registered his career best figures of 10-0-36-7. Waqar led Pakistan to a comfortable win at Leeds and followed up his Leeds act with another destructive show against the world champions Australia at Trent Bridge. Defending 290, Waqar was expensive as he gave away 59 runs from his eight overs but yet in a man-of-the-match performance, he picked up six wickets which included the scalps of Mark Waugh, Matthew Hayden, Michael Bevan, Steve Waugh and Andrew Symonds. Pakistan won the match by 36 runs.

Ryan Harris bowled a spell of 10-0-43-5 at Adelaide to help Australia win the third game of the series in a row. With this win, they ensured the series victory. In the next game, Harris picked another fifer, this time he registered a spell of 9.5-3-19-5 as Australia cruised to a 135-run win in the fourth ODI at Perth to go up 4-0.

Vitori in his ODI debut claimed figures of 10-0-30-5 against Bangladesh at Harare as the visitors lost the game by four wickets. Two days later, Vittori went on to better his bowling figures and this time claimed 9.3-0-20-5 as Zimbabwe went up 2-0 in the series.

In a quick and bouncy Perth, West Indies batsmen found it hard to cope against Starc’s pace. The lanky left-armer bowled a spell of 6.5-0-20-5 as West Indies folded for 70 runs. The 100 overs game lasted a total 33.1 overs as Australia won by nine wickets.

In the next game, at the same venue, once again Starc demolished the West Indian top order. This time he claimed figures of 8-1-32-5 and all the West Indian top four batsmen were caught leg before off his bowling. Australia went up 2-0 in the series.

The Indian batsman found it tough to play the young Bangladeshi left-arm pacer, who rewrote the record books as he went on to be the first bowler to claim 11 wickets in his first two ODIs. The 19-year-old’s sensational performance helped Bangladesh beat the strong Indian side in two consecutive ODIs and in doing so, Bangladesh for the first time registered a series win against their dominant neighbours. 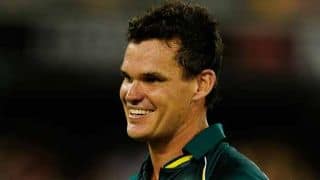