Yuvraj said he wants to focus only on cricket and also spoke about making a biopic on his life.

Indian cricketer Yuvraj Singh has been an inspiration for many youngsters, be it an aspiring cricketer or any other sportsperson. The whole cricketing world knows how he played during the ICC Cricket World Cup 2011 despite of suffering from cancer and led the charge for the Indian side throughout the tournament with his all-round performance.

Like many other cricketers, Yuvraj too came up with a book which reveals his story and was released in 2013 with title ‘The Test of My Life’. The 34-year-old will be getting married soon and is sure that his carrier has almost come to that position from where he can call it a day anytime. But in a recent interview to ANI, Yuvraj said he wants to focus only on cricket and also spoke about making a biopic on his life. “My priority is cricket for now. Of course, I would love to tell my story through a film but only when I would think of hanging my boots,” said the southpaw batsman.

He also talked about the work that is being done by his foundation — YouWeCan and added, “Under YouWeCan, we have provided education to kids whose families have lost money for their kid’s cancer treatment. We have done over one lakh cancer detections in rural areas and also, we have been able to generate 600 jobs till now. So, YouWeCan is heading the right way.”

Looking at his current cricketing career, Yuvraj is currently part of India’s T20 side but has been out of the game since last few weeks due to injury. He will be back soon in the field and will be playing for Sunrisers Hyderabad (SRH) in the ongoing ninth edition of Indian Premier League (IPL). 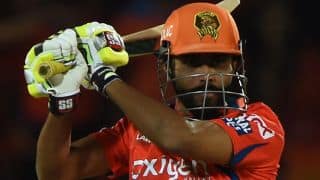