Rahane’s 127 runs knock in the first innings contained four sixes and his unbeaten score of 100 in the second innings.

Ajinkya Rahane didn’t enjoy a prolific run in the ongoing Test series against South Africa till the Delhi Test. But in the ultimate Test of the series, he plundered two consecutive centuries in two innings and created some captivating records to his name. Also Read: Cricket fraternity applauds Ajinkya Rahane on Twitter for his twin-tons

Rahane’s 127 runs knock in the first innings contained four sixes and his unbeaten score of 100 in the second innings saw three massive sixes being scored at the Feroz Shah Kotla. Overall, he hit seven sixes in both the innings. With this feat, he now holds the joint second-highest record for hitting three or more sixes in both the innings of a Test match by an Indian batsman along with Harbhajan Singh.

Navjot Singh Sidhu is sitting at the apex of this list at the moment with eight sixes against Sri Lanka in Lucknow in 1993-94. It’s an incredible record to have and Rahane rightly deserved it. Indian innings was declared in the second innings as Rahane remained unbeaten on 100 or one wouldn’t know he would have surpassed Sidhu’s record too. Also Read: Twitter erupts as Ajinkya Rahane scores his maiden ton in India

India were in a dominating position due to some brilliant batting display from the elegant right-handed batsman and will look the win the Test at the earliest. 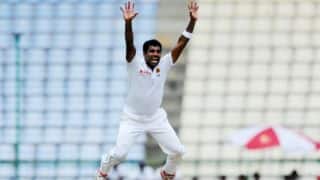