It is always a special feeling for a player when he betters his mentor’s record. Moreover, it gives a proud feeling to the mentor to witness his pupil reach enormous heights in his career.

Gooch’s benchmark of 8,900 runs in 118 Tests was surpassed by the English skipper in his 114th Test, the record which stood unbroken for almost 22 years.

“It is a very special day for me personally. I can’t really describe it, to be on top of the list. I don’t deserve to be there with the way I play You don’t play for the records, but I know I needed 32 runs but to break the record, you want to do it with an innings (that matters). It was an amazing moment, very humbling,” Cook was quoted in a report from Agence France-Presse (AFP).

Before breaking the record, Cook revealed his admiration for Gooch and still says that he does not come near to Gooch, who he considers to be one of England’s greatest ever Test cricketers. The 30-year-old worked under the watchful eyes of Gooch as an 18-year-old at Essex and again for five years with England, when Gooch was the England’s then batting coach.

The southpaw had a run drought when he went without a Test century in nearly two years. In that period, Cook faced a 5-0 Ashes trouncing in Australia, exile of Kevin Pietersen, his axing from World Cup squad and the sacking of coach Peter Moores.

“The last 18 months have been tough personally as a captain,” said Cook.

“A lot of stuff has gone on the last four or five months, but I have given time to my game and I feel like it is going well,” he added.

Cook, who reached the milestone a day after James Anderson became the first Englishman to take 400 test wickets, was out for 75 to Mark Craig while sweeping and is now on 8,944 runs.

After surpassing Gooch, he became the 13th leading Test run-scorer overall with batting legend Sachin Tendulkar at the apex of the list with 15,921 runs in 200 matches. 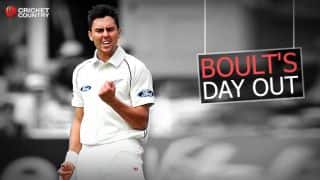 Trent Boult’s day out against England at Headingley