The last time they faced each other, Australia defeated India fair and square in the recently concluded tri-series which Australia won.

The countdown to ICC Cricket World Cup 2015 has started, only a week remain to the first match of the tournament. The pre-tournament warm-up matches kicks-off from Sunday. Australia take on India in the warm-up match in Adelaide. The last time they faced each other, Australia defeated India fair and square in the recently concluded tri-series which Australia won.

Heading into the tournament, both teams have injury worries. Australia will be without Michael Clarke while India will not have Ishant Sharma. Both sides will have to monitor other players as well, the warm-up matches will test the players fitness and form. All eyes will on India, with them being the defending champions. And Australia will look to get the title back in their cabin.

The warm-up match will be telecasted LIVE on Star Network.

Also, watch the LIVE STREAMING of the match on starsports.com. 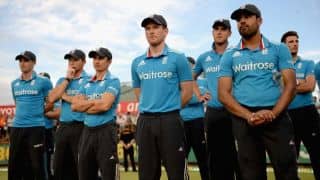 ICC World Cup 2015: England to start on a tough note