India squared off against Australia in the 5th One-Day International (ODI) in the on-going Tri-series in Australia. While India celebrated Republic Day, Australia had their Australia Day on 26th January, 2015.

Start of the match was delayed due to rain. Toss took place at 9:10AM; Australia won the toss and chose to field first. David Warner, George Bailey, Mitchell Marsh, Josh Hazlewood and Xavier Doherty came in for Australia while Ishant Sharma and Ravindra Jadeja were picked up for India.

Match started at 9:30AM, Shikhar Dhawan and Ajinkya Rahane opened for India as Mitchell Starc started for Australia with the ball. Play  was suspended due to rain when India were 6 for 0 in 2.4 overs.

Match resumed later on but was shortened to 44 overs per side. India lost Dhawan early after the rain interruption.

India reached to 51 in 11 overs as Rahane and Ambati Rayudu steadied the Indian innings. Rayudu fell to returning Marsh after a brilliant catch by Warner. India were 69 for 2 in 16 overs when it started raining again.

After a lengthy delay and pouring rain, the umpires decided to call-off the match at 2:50PM. Both Australia and India share two points each. The next match between India and England is virtually a semi-final; whoever wins will go into the finals to face Australia.

The crowd cheers once again as the covers are removed #AUSvIND #AustraliaDay pic.twitter.com/oPMRQxbJ7B — cricket.com.au (@CricketAus) January 26, 2015

More rain here at the @scg and the covers go back down. #AUSvIND #AustraliaDay #WWOS pic.twitter.com/iEfnPFKyCm — Wide World of Sports (@WWOS9) January 26, 2015

The match will resume at 4:06 pm AEDT and is reduced to 44 overs per side. #AusvsInd

Shikhar Dhawan is going through an absolute nightmare……probably fearing every ball will get him…. — Harsha Bhogle (@bhogleharsha) January 26, 2015

.@davidwarner31 let the crowd know how good the catch was! He’s been getting plenty of advice this arvo. #AUSvIND pic.twitter.com/trZBle5Lg7

The rain is unrelenting in Sydney. The covers are still on. Watch this space for further updates. #AusvsInd

Good to see even in the rain delay there are still people keeping busy! @JamesFaulkner44 #AUSvIND #AustraliaDay pic.twitter.com/AeuFDT4tZX

Rain has stopped as of now and the umpires are on the field for inspection. Update on the match soon. #AusvsInd

The umpires are out in the middle! Could be a decision on the match soon! #AUSvIND #AustraliaDay #WWOS pic.twitter.com/7MSeCdzGRm — Wide World of Sports (@WWOS9) January 26, 2015

The #AUSvIND match has officially been abandoned

Unfortunately rain is the winner in the 5th Match of the Tri Series between Australia and India at the SCG #AusvInd pic.twitter.com/rTpdreoMdq

Decision made! The #AustraliaDay match has officially been called off! Australia remain undefeated. #AUSvIND #WWOS pic.twitter.com/W4FaAdS8AO

The next ODI match at Perth btw India and England on Friday is now the #triseries semi-final. The winner play Australia in final #AusvsInd 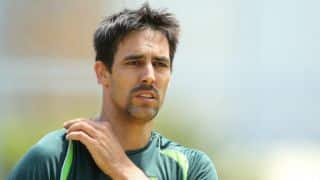