Unlike the Mithalis, Harmanpreets, Smritis and Jhulans, Nuzhat Parveen’s is a relatively unknown name. Nuzhat, picked as second wicketkeeper (Sushma Verma was first-choice), was the only woman player of India’s 15-member women squad who did not get a game in the ICC Women’s World Cup 2017, where India finished runners-up. Nuzhat’s family belongs to Madhya Pradesh. Her father Masih Alam does not regret her daughter not playing a game and has done his bit to keep her motivated for the entire series.

“It was a team management decision and we don’t cry over it”, her father, Masih Alam was quoted in a report from Lahore Times. “We have been watching the matches on TV here and are in regular contacts with our daughter and inspiring her to keep herself well in the practice session. A day will come and you will get a chance to play.”

Alam is a machine operator in the coal mine Northern Coalfields Limited. Her family belongs to a lower middle-class group. BCCI’s prize-money of INR 50 lakhs to each member of the squad is a huge boost to the family. Alam hopes that his 21-year-old daughter can now by a new house in Mumbai.

INR 50 lakhs for a house in Mumbai is barely enough, but Masih is ready to borrow money to make up for the remaining amount. Nuzhat works for Railways in Mumbai and currently lives on rent.

“My daughter, now working in the Railways in Mumbai is living in a rented flat. With this huge amount now she will be able to think of her own house. I know even with this amount (INR 50 lakhs) it is extremely difficult to buy a house in Mumbai but once she returns from England, will tell her to search for a flat for herself. Will try to borrow money and help her with the remaining amount”, Masih said.

‘Nuzhat will play next World Cup’

Anil Anthony, Nuzhat’s coach, agrees with the decision of not including his daughter in the XI in any of the World Cup games as that would have changed the successful combination: “Indian women team was doing extremely well and it would not have been a wise decision to change the winning combination after we won against Australia in the Semi Final. Secondly, Nuzhat is a second wicketkeeper and could not have got the chance only in case of injury to the senior wk. But Nuzhat is very young and may be in the next World Cup she will be able to play the matches.” John Tufton and the first LBW in First-Class cricket 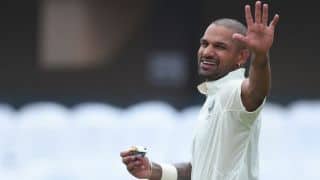