Recently, Stokes received a warning from Northallerton Magistrate Court for his driving.

It seems like Ben Stokes’ hard days are not leaving him. First his forgetful final over in the final match of ICC World T20 2016 against West Indies and now receiving a warning notice from a court. He has been England’s best all rounder after Andrew Flintoff and it looks like controversy is not going to leave him easily. Also Read: Carlos Brathwaite’s four consecutive sixes to seal the World T20 title

Recently, Stokes received a warning from Northallerton Magistrate Court for his driving. He has been asked to stay away from driving for next six months and if found doing the same he will be jailed. He has already faced court after having over speeding issue within last two years.

As reported by TheSun.co.uk, the young English cricketer admitted his mistake of driving at an average speed of 75 mph on a 50 mph section between Barton and Scotch Corner on September 20, 2015 morning. It was the day after he top scored against Australia in a match. He also admitted his mistake on a similar incident by driving at an average speed of 61 mph on the A1 northbound carriageway past the same road works on August 26, 2015. This was also happened after a good performance by him for England against Australia. It was two days after he claimed three wickets in final Test of Ashes 2015. Also Read: When Ben Stokes turned ‘selfie-guru’ for a fan and won hearts

There were two more charges against him but were dropped because he admitted it was him behind the wheels when he failed to reveal his identity of the driver to the police.

According to Stokes’ consel Laura Nash, he will not be driving till this year end and would stop going over speeding. He states, “He also faces the embarrassment of having to declare the disqualification to his employers, Durham and the ECB (England Cricket Board). He is very much aware that this sends out the wrong message, that a professional sportsman has been captured speeding on four separate occasions.”

Magistrate Anna Ramsden further fined Stokes for £830 and warned him that he would have to face jail time if he is found behind the wheels in before December 14, 2016.

Stokes is currently enjoying his break from England team after getting injured during the first Test against Sri Lanka. If all goes well, then he might play for England in One-Day Internationals against Sri Lanka. 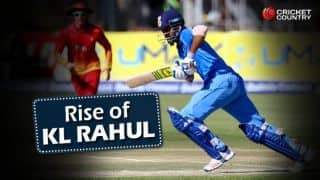