Lee is currently playing for the Sydney Sixers and will continue to play for them till the end of the season.

Former Australian fast bowler Brett Lee announced his retirement from all forms of cricket on Thursday. The 38-year old said that this season’s Big Bash League (BBL) will be his last tournament as a professional cricketer.

Lee had last played for Australia in 2012 and has since only appeared in domestic Twenty20 (T20) leagues. Lee is currently playing for the Sydney Sixers and will continue to play for them till the end of the season.

Over the years, Lee was one of the fastest bowlers in the world, often competing with Pakistan’s Shoaib Akhtar for the top spot. He had a brilliant international career. In 76 Tests, he took 310 wickets and in One-Day Internationals (ODI), he was more lethal, picking 380 wickets in 221 matches at an average of 23.36.

Lee was congratulated by the cricket world on Twitter.

Congratulations @BrettLee_58 on an outstanding career, a great role model & servant to our game! #TrueChampion

Congrats on an incredible career big man @BrettLee_58 it was always a challenge and a privilege to play against you!

Congrats @BrettLee_58 on his career. Bowled Express pace over an unbelievably long period Had a fun batting P/ship in his 1st test #Binga

Congratulations to @BrettLee_58 on an amazing career in all forms of cricket around the world! Wish you all the best with retirement!

Congratulations to @BrettLee_58 on an amazing career. Going out bowling like a champion!! Will be missed on and off the park!

My great mate @BrettLee_58 hanging up the boots… Incredible career and longevity, what dreams are made of. #Congrats #Legend

Congrats of a fantastic career @BrettLee_58

Mr @BrettLee_58, what an amazing career! Kids dream of having a career like yours…well done, buddy! Be proud, VERY PROUD! x

.@BrettLee_58 twice took a five-for in an ODI at Lord's. He loaned the MCC Museum the match ball in '09 #LoveLords pic.twitter.com/K7aHTG6BsG 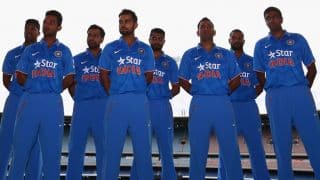 Brett Lee: ‘Can I first start by thanking my amazing family’