A tribute to Sachin Tendulkar's career in photo exhibition at Thiruvananthapuram

A tribute to Sachin Tendulkar's career in photo exhibition at Thiruvananthapuram

Cricket legend Sachin Tendulkar’s illustrious career and life in the last decade will be showcased in a five-day photo exhibition from January 20 at Thiruvananthapuram.

The event named as “Sachin: A Lens Story” will feature 60 photographs of the maestro’s happy, emotional and pride moments, chiefly India’s 2011 World Cup victory and his retirement.

The exhibition is a part of ‘Run Kerala Run’ marathon which is taking place across the state on January 20 to create awareness about the 35th National Games which the state hosts. Tendulkar, who is the Goodwill Ambassador of the National Games, is expected to take part in the marathon and then attend the exhibition.

The photographs, clicked by the Chief news photographer of Malayala Manorama R S Gopan in his 14-year-long career as a press photographer will be displayed in the special thematic gallery.

A self-confessed Tendulkar fan Gopan said that the exhibition is the result of his decade-long effort, “The 60 pictures, to be exhibited, were handpicked from over thousands of Sachin photographs which I took. It was a bit herculean task. But, I focused on the photos related to Team India’s 2011 World Cup victory and Sachin’s retirement,” he told PTI.

The gallery, designed on the basis of a cricket pitch will feature four-feet-long pictures. The photographer was reported to be saying that though the gallery is a temporary set-up, talks are on to make it a permanent arrangement with the support of Kerala Cricket Association (KCA).

“I am planning to hold similar shows in all district headquarters with the support of KCA. Taking the exhibition to the national level is also another dream,” he added.

Gopan is a renowned figure in the photography circle and has been a recipient of various awards namely the Photography Excellence Award from the Mumbai Press Club, Lourdian Sports Photography Award and so on. 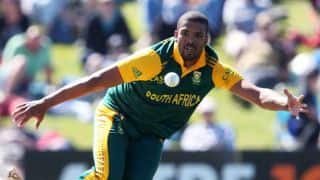