The Stadium saw a huge crowd turnout and chants of 'Mahi.. Mahi..' as Dhoni played with professionally trained football players even despite heavy rainfall.

India’s limited-overs side’s captain MS Dhoni is an ardent football fan and this is no secret. Whenever the ‘captain cool’ finds leisure time, he makes it a point that he partakes in football matches. As a matter of fact, Dhoni also participates in charity football matches as and when the opportunity comes and does his bit for the society. ALSO SEE: Ziva calling MS Dhoni, ‘Mahi’.

On a recent occasion though, the 35-year old Indian captain participated in a football match for fun as well as to test his endurance. He was seen playing football for Silli Sports Academy, a local football club in Ranchi, against Ranchi XI at Silli Astro Turf Stadium. According to a report by Hindustan Times, Dhoni played in the match for the full duration of 90 minutes. He did so to test his stamina and endurance.

The Stadium saw a huge crowd turnout and chants of ‘Mahi.. Mahi..’ as Dhoni played with professionally trained football players even despite heavy rainfall. He played a crucial role in the match by setting up two goals by with his skills as the team won 6-2. It is notable here that Dhoni started his career as a footballer and even played it till district level. The player seemed quite excited about the victory and said “I played a full soccer match after a long time and enjoyed it thoroughly”, he was quoted by the Hindustan Times. ALSO SEE: Watch MS Dhoni’s crazy football skills along with Virat Kohli’s brilliant presence of mind.

After winning the ODI series against Zimbabwe in June, the Indian captain has been away from cricket and spending some quality time with his family. He is making the most of this phase time by spending quality time with his little daughter Ziva and hitting the gym, regular updates of which he keeps on sharing through his Twitter and Instagram accounts.

The Indian skipper felicitated two girls, who had won National awards in Wushu Championships, after the match was over. With a heavy Test season ahead, it is unlikely that Dhoni will get to play much cricket for India this year. However, there is a possibility that he may be seen in the short International T20I series which is planned to take place in the US. If that does not happen, his next assignment would be India’s ODI series against New Zealand in October. 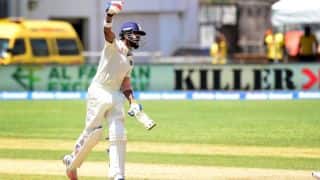 Why KL Rahul is crucial for Indian cricket