The tragic incident took place at the Salt Lake ground during a one-day match between East Bengal and Bhowanipore Cricket Club on Friday. Keshri collided with his team-mate Sourabh Mondal while attempting a catch which was hit towards the cover. Keshri was at deep cover when he charged in, while bowler Mondal too rushed in for the catch. Neither of them noticed each other and collided. Another teammate, who was fielding at point, said that Mondal’s knee crashed into Keshri’s head and neck area. Keshri was immediately rushed to hospital where his condition improved. However, he later went into cardiac arrest which resulted in the tragic demise of Keshri.

“Why was my son shifted to another hospital, why wasn’t the family informed about this move,” asked Ankit’s father. “On Friday, tests and scans were done initially and the doctors said he is fine. We were told he is normal and he will be transferred to the general ward from the Intensive Care Unit. But later they said, he had contracted fever and so they did not shift him to the general ward. At the other hospital, doctors said there is a slight injury and he is drowsy. They said he will remain there for three to four days. On Sunday, they informed us he will be shifted to the general ward, but we got a phone call early morning today saying there was a heart block,” he added.

East Bengal coach Pranab Nandy was dismayed. “There was nothing in the MRI report. So, how could this happen?” he questioned.

Sourav Ganguly, who is now the CAB Joint Secretary, said: “I was keeping a tab on his recovery. I cannot believe he has left us like this. He was in my T20 vision for Bengal.”

Ankit captained the Bengal U-19 team in the Cooch-Behar Trophy and was in the 30-member India U-19 probables list for the 2014 Colts World Cup in the United Arab Emirates. He was in the Bengal A U-23 side for the CK Nayudu Championship. 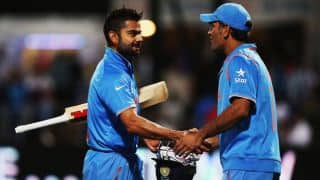