But he won nothing other than the ball signed by Jonathan Wells and injured his finger badly after taking the catch.

A burning desire to take a catch in an unorthodox style has left one Australian cricket fan in hospital with a broken finger. The story doesn’t ends here as his friend fainted and required medical assistance after watching the bleeding finger.

It was the grand Big Bash League final at Manuka Oval on Wednesday when Tom Zouch was standing underneath a high-ball. Zouch had earlier dropped a catch when Australia were playing South Africa last year and wanted to overcome the humiliation.

According to a report by canberratimes.com.au, Zouch said, “During the one-day game with Australia and South Africa, I was underneath a six and then this kid just got in front of me and stole the catch. I was certain that was my once in a lifetime opportunity gone.”

With a big zest to overcome the slur and injustice of dropping a catch previous year, Zouch wanted to prove his friends wrong after they insulted him in every known way. “All my mates have been giving me shit since that day so when that six went up last night I knew I needed to redeem myself and got a bit desperate,” added the 29-year old fan.

Zouch was wearing a KFC bucket hat, a requirement to win an ‘entertainment system’ if you catch a six during the game. The ball was hit during the half-time entertainment break and went high which made Zouch rush to take.”I probably knocked over a few people because of my selfish pursuit and there’s no doubt I reached over the guy in front of me to take the catch,” he quipped.

But he won nothing other than the ball signed by Jonathan Wells and injured his finger badly after taking the catch. “After the catch I started bleeding a little bit and I showed it to another mate, who fainted on the spot and had to be treated by St John’s Ambulance paramedics,” he said.

Zouch added saying, “I went down to the paramedics and they pulled out the nail and were going to stitch it up, but they realised the bone was exposed so they sent me off to hospital. When I got there, they told me my finger was fractured and I had to come in the next day to see a plastic surgeon as they needed a specialist to fix my finger.”

Zouch’s girlfriend Emma Hampton didn’t feel sorry for her partner after his excitement did rub of the pain after initially reluctant to be treated by paramedics. “I saw the ball coming down early so backed away and created space for him. He was pretty keen to make it happen,” Hampton said.

“They eventually put him on a drip with antibiotics and recommended we didn’t stay to watch the game, but of course he wanted to stay for Brett Lee’s last overs. He went back with a cannula in his arm and his arm in a sling to watch the end of the game,” added Zouch’s partner. 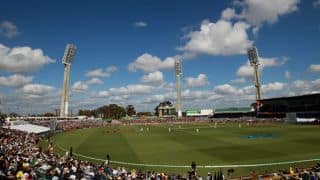