Though Southee is reputed for his aggressive batting, the feeling of hurting someone isn't good.

Sports reporting isn’t easy, especially if you are covering from the ground. Just like a sportsman, a journalist too is expected to keep an eye on the action in the greens. Australian journalist Melinda Farrell didn’t and learned the lesson in a hard way.

While doing a piece in front of camera, ahead of New Zealand’s first Test against England at Lord’s, the ESPN reporter got struck by a Tim Southee blow on the back. The Black Caps were having a training session not far away and the hard-hitting Southee was wielding the willow in the nets.

The ball’s flight was picked by the camera as Melinda and her two co-hosts heard “duck”. All three ducked covering their heads but it no time the ball struck the Australian reporter, who did feel the pain.

A concerned Southee immediately rushed over to check on Farrell and said, “I saw you duck and I thought ‘oh no’. I thought it might have hit you in the head.”

Putting a brave face, Melinda referring to the bruise said, “I’ll wear it with pride (it’s) a badge of honour.”

“It’s lucky it’s cold and you’ve got a jacket on,” Southee said.

Melinda later tweeted about the incident:

Thanks for all the messages and tweets. I’m fine. Barely felt it. Kinda. And Tim Southee was really lovely with his concern. Hilarious day.

Though Southee is reputed for his aggressive batting, the feeling of hurting someone isn’t good. Better known as New Zealand’s strike bowler, he will not mind bouncing out the English batsmen against whom he claimed seven wickets in the World Cup 2015 group match at Wellington. The Brendon McCullum led New Zealand take on England in the first Test starting at Lord’s on Thursday. 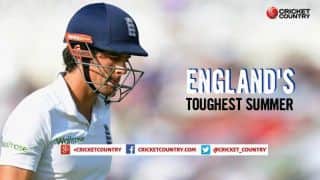