Many cricketers have tweeted their opinion about the Nagpur pitch.

A Test match is considered as a real test of cricketing qualities hence the reason it is played for a period of five days. But the pitches which the ongoing series between India and South Africa Test series are witnessing are creating a lot of stir in the cricket fraternity.

The ongoing Test at Nagpur saw the visitors being dismantled for a mere score of 79 runs in their first innings. On this pitch the ball was turning from Day 1 onwards. South Africa resumed their batting from their overnight score of 11 for the loss of two wickets but their whole line-up was decimated for 79 runs inside 34 overs.

Cricket experts and players around the world have taken to their Twitter handle to express their views. Many cricketers have tweeted their opinion about the Nagpur pitch. India now have an upper-hand in the game as they have set a mammoth target of 310 runs for South Africa to chase.

We are saying the same thing, I am happy for wickets or runs to be scored but conditions must fair. https://t.co/WAELzmXDsV

No this is not pitch tampering it is just called over prepared It is good to see turn just not so early https://t.co/vRs9fWbLXe

Guys you are missing my point of view so enough from me It’s not about Aus SA or anyone is right. https://t.co/5IBtq5Qdws

This pitch in Nagpur is nothing short of diabolical for Test Cricket … Telling me that was prepared to last 5 days..!!!!!!!!!!

People can complain about pitches all they want but this is a hell of a lot more entertaining to watch than the Perth Test.

Jo! You would be reverse sweeping the shit out of it bru!! https://t.co/7RJhCmK1Pq

Why is everyone calling me for a comment – is it a bad wicket #IndvsSA ? Jonty Rhodes (@JontyRhodes8) November 26, 2015

This wicket in #Nagpur can’t be good for test cricket, 25 wkts in 142 overs. #INDvSA

Calling this a terrible pitch is demeaning Ashwin and Jadeja. Nobody did that after Durban 1997 when Donald ran through India. #INDvSA Abhishek Mukherjee (@ovshake42) November 26, 2015

Spin mayhem in Nagpur. All I can say is Indian batsmen better be prepared for some chin music when they tour South Africa next… Cricketwallah (@cricketwallah) November 26, 2015

Much concern about the pitch in Nagpur. Hopefully, like some pitches in the past, it will play better than it looks.

I agree with many comments that wickets in Australia have been far to flat, let’s have a happy medium, a fair contest between bat & ball… Tom Moody (@TomMoodyCricket) November 26, 2015

No … Just a poor pitch https://t.co/EQeToq4VmI

Great to see everyone’s passion in the responses! We all love the game, I just love seeing games won and lost on the 5th day! #testcricket Glenn Maxwell (@Gmaxi_32) November 26, 2015

1st time watching this test between #INDvSA 2nd day…Wow what kind of pitch is this?!?! Alex Tudor (@alextudorcoach) November 26, 2015

Whilst its important to prepare a pitch to suit the home team, the answer is to give the visiting team the option to decide to bat/bowl 1st

It’s called Test Cricket because it tests the skills of the various disciplines. Not seeing much of this at the moment #heavilyfavouringspin

Just to clear up,those that have played there know what the proteas are going thru,never nice but that’s top level sport for you! #truetest Herschelle Gibbs (@hershybru) November 26, 2015

Good cricket = Something for everyone. Swing and seam early, good for batting, spin day 3,4,5. Someone wins and someone loses Michael Clarke (@MClarke23) November 26, 2015

Playing on turning wickets was great fun. It is mostly about facing your mental fears,prepared to attach, rotate strike @StarSportsIndia key Matthew Hayden AM (@HaydosTweets) November 26, 2015

Going to rewind ….”What a great pitch we have out in India ! Marvellous ! Let’s have more ! Credit to India for leading the way ” David ‘Bumble’ Lloyd (@BumbleCricket) November 26, 2015 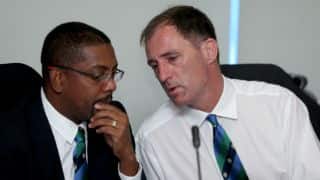 WICB to meet with CARICOM on December 4