Several cricketers posted their best wishes and greetings from their social media accounts to mark this special day.

Cricketers are often seen making the most of social media on special occasions. January 26, 2016 marks the 67th Republic Day in India. On this auspicious occasion, social media was flooded with wishes from cricket fraternity across the globe. Irrespective of their nationalities, cricketers send in their wishes to the Indian fans.

It was on this day that the constitution of India act came into existence in the year 1950 by replacing the Government of India Act of 1935. Several cricketers posted their best wishes and greetings from their social media accounts to mark this special day. Though the Indian cricket team is touring Australia at present, but they did not forget to address the nation.

We present you with some of the tweets from cricket fraternity on the occasion of Republic Day:

Spent quality time on this special day with these gentlemen who give their services 2 our country #HappyRepublicDay pic.twitter.com/TQiC9VMbP3 Irfan Pathan (@IrfanPathan) January 26, 2016

Let us remember the golden heritage of our country and feel proud to be a part of India. HAPPY REPUBLIC DAY pic.twitter.com/U7O8Vnc5E6 Bhuvneshwar Kumar (@BhuviOfficial) January 26, 2016

WISH U ALL A HAPPY REPUBLIC DAY. PROUD TO BE AN INDIAN Kris Srikkanth (@KrisSrikkanth) January 26, 2016

Happy Republic Day fellow Indians. Preamble to the Constitution tells us clearly what India should be. Let’s do it! pic.twitter.com/DeRIKBJGgt Cricketwallah (@cricketwallah) January 26, 2016

On republic day, salute the flag, sing the national anthem, feel proud as an Indian & then break the first signal on the road. #ChangeIndia Sanjay Manjrekar (@sanjaymanjrekar) January 26, 2016

Wishing all of u a very happy republic day Virender Sehwag (@virendersehwag) January 26, 2016

Celebrating the sprit of India feeling joy and Pride of being an Indian #HappyRepublicDay to all my indian and all our heroes Suresh Raina (@ImRaina) January 26, 2016

Wish all my countrymen a very happy republic day. Lets celebrate the spirit of being indian. Spread love n brotherhood. A photo posted by Unmukt Chand (@unmuktchand_official) on Jan 25, 2016 at 6:23pm PST 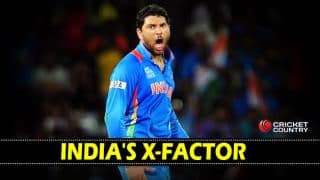 India vs Australia 2015-16: Yuvraj Singh brings the X-factor to the table in T20Is