Cricket and bollywood are the two most loved and followed professions in India. Both enjoy massive fan following; so much so that the cricketers and actors are idolised and revered, and when these two come together, the hysteria reaches epic proportions.

Recently, cricket met bollywood when the Pathan brothers Irfan and Yusuf hosted famous actor Suniel Shetty at their home. Younger of the two, Irfan posted a picture featuring the three of them through his official Twitter account, with an accompanying caption that read:

“Good conversation Abt cricket,films n life.It was good 2 have u at home Anna.everyone loved ur simplicity.#goodhuman”

Shetty, who is fondly called as Anna, recently paid a visit to the Pathan household. Apparently, he follows cricket quite keenly, and even captains the Mumbai Heroes team in the Celebrity Cricket League (CCL). Irfan and Yusuf got the much deserved break very recently after their team Baroda finished runners-up in the Syed Mushtaq Ali T20 Trophy.

The brothers celebrated this time away from the game by hosting Anna. Though the purpose of the visit is unclear, a possibility of Shetty seeking tips from the cricketing brothers for the upcoming season of CCL cannot be ruled out. 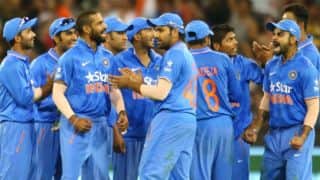