The South Africa told in an interview to Press Trust of India that he is a "fan" of Yadav and that the Indian will be a force to reckon with.

In his still nascent career of 12 Tests in which he has taken 43 wickets, Umesh Yadav has done reasonably well. He was one of the most productive bowlers in the recently-concluded ICC World Cup, playing an important part in his team reaching the semifinals. His haul of 18 wickets was next only to Mitchell Starc and Trent Boult who both captured 22 wickets.

Indian pace bowlers do not command the kind or respect their spinners get at the international level. Which is why it was very heartening to read the lavish praise heaped upon Yadav by none other than Dale Steyn, the world’s deadliest fast bowler in contemporary cricket and one of the finest ever in the history of the game. The South Africa told in an interview to Press Trust of India that he is a “fan” of Yadav and that the Indian will be a force to reckon with.

Unlike the general pessimism that prevails in India about its fast bowlers, Steyn is upbeat. The South African said of Ishant Sharma, “When he is injury free he is a freak of a bowler. He can do some amazing things with a cricket ball. He is tall, he has got good pace, he hits the deck; he has got a slightly different action so he brings the ball in with his wrist. He has all things that can add up to be a very good fast bowler.”

Set for an eight season in the Indian Premier League, also had a few good words for some of the other Indian fast bowlers: “I have seen some of these players, especially from India and I have said that they are going to make it big and they have gone on to represent the nation. Vinay Kumar was one of them he went on to play for India. Bhuvi [Bhuvneshwar Kumar] ended up with us [Sun Risers Hyderabad] last year and we worked along well and he nearly ended up with the purple cap. And that’s nothing to do with me, it’s all their skill, honestly. But it was nice to work alongside someone like that and share ideas. Ishant was somebody that I felt I connected well with and he went on to do good for India. But he did play for India before I met him. So couple of the Indian guys that I have spent some time with have went on to do some magical things.” 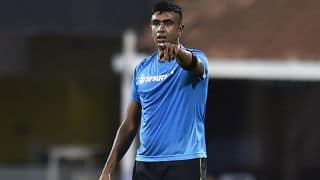 IPL 2015: Chennai Super Kings aim to leave off-field distractions aside as they take on Delhi Daredevils in IPL 8 tie