Warner is the fourth Australian player to be injured in the MCG nets this week.

Australia’s torrid time with injuries continued on Saturday, as David Warner now joined the casualty list. The opener, who was struck on his left thumb in Brisbane last week, was now hit by a Peter Siddle delivery during a net session before the start of play on day two at Melbourne

As reported by Cricket Australia (CA) website, the injury was severe enough to prevent him from taking field on Saturday.

“David Warner was hit in the right forearm during this morning’s net session. He has significant bruising which is limiting his ability to field at the moment,” said a CA spokesperson.

Warner is the fourth Australian player to be injured in the MCG nets this week. On Tuesday, Shane Watson and Mitchell Starc were forced to leave the training after being struck in the nets, and on the next morning Shaun Marsh was struck on his left thumb. 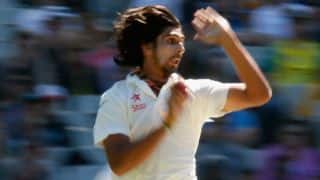