Sri Lanka crushed England by 90 runs in the sixth ODI.

Probably playing his last One-Day International on his home ground, Kumar Sangakkara led from the front with a brilliant 112. Riding on the southpaw’s hundred, Sri Lanka crushed England by 90 runs in the sixth ODI and sealed the series 4-2, with one match left.

Speaking on the emotional farewell of Sangakkara at his home ground Kandy, team-mate Mahela Jayawardene tweeted about the occasion.

Brilliant knock from @KumarSanga2. Fans in Kandy gave him a great ovation! Rest day with the family. It will be few emotional days coming up

Sri Lanka had poor start in the game though as Jayawardene, who came out to open the innings in this match, but flopped. He got a good ball from Chris Woakes in the fourth over of the match. Sangakkara, who was probably playing his last game at his home ground along with Tillakaratne Dilshan build the innings with a 153-run partnership for the second wicket. They took their time initially, later accelerated the scoring rate. 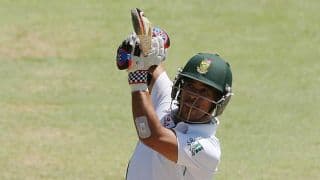