Cook has been replaced by fellow batsman Eoin Morgan, who has led England in eight ODIs

In less than two months before the ICC World Cup 2015, Alastair Cook has been removed as England One-Day International (ODI) captain. He has been replaced by Eoin Morgan.

Cook, 29, was appointed the captain of the ODI side in 2011. He has been going through a lean patch, averaging only 27.52 in his last 20 ODIs and at the same time England hasn’t performance in this format has been pretty ordinary too.

After England’s recent 5-2 defeat in Sri Lanka, Cook insisted he wouldn’t resign, but selector on Friday decided to end his reign.

As reported by BBC, former England captains like Nasser Hussain, Alec Stewart and Michael Vaghuan had been calling for Cook to be replaced as captain. However Cook has seen a fair amount of success in the Test format and earlier this year led England to a 3-1 win against the touring Indians.

While many have criticised the timing of the move, as it’s just ahead of the World Cup, Vaughan welcomed the decision and tweeted: “Right call made by England… Now I hope Cook can have a good break and then come back in the summer as the Test player we know he can be… Congrats @Eoin16… The right man for the job….”

The decision was also welcomed by Kevin Pietersen, tweeted: “Great news. Top player, leader and bloke. Hope I get to play for him.”

Morgan, who began his career with Ireland, has played 107 ODIs for England. Morgan has led England in eight ODIs and he averages 71.16 in those games.

Morgan will now lead England in the tri-series against Australia and India, followed by the World Cup Down Under. 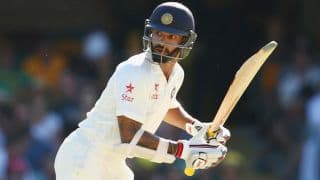