James Whitaker said that there was no place for Alastair Cook amongst England's strongest 15 one-day players.

Eoin Morgan has officially replaced Alastair Cook as the England One-Day International (ODI) captain, after the team’s miserable performance in the limited-over series in the last few series.

Morgan who took over the captaincy was quoted by England and Wales Cricket Board (ECB) as saying, “It is a huge honour to captain England an I am delighted to be leading the one-day side. I firmly believe that with the players currently involved in the one-day set up we have the makings of a very good one-day side, a young side that can surprise people at the World Cup.”

Cook said, “I am gutted to be left out of the World Cup squad and it is likely to take me a while to get over the disappointment. That said I wish Peter, Eoin and the lads all the best for the World Cup. I would also like to thank all the players and fans who have supported me during my time as One-Day captain.”

National Selector James Whitaker said, “We spent a considerable time yesterday discussing the make up of a squad that gives England the best possible chance of success at the World Cup which begins in less than two months. Having reviewed the recent series against Sri Lanka we came to the conclusion that there was no place for Alastair Cook amongst our strongest 15 one-day players and therefore recommended Eoin Morgan be appointed One-Day captain.”

England Cricket Managing Director Paul Downton said, “I have complete confidence in the decision made by the selectors and having spent time with Alastair yesterday he accepts that it has been made in the best interests of the one-day side. “

“Eoin has held a senior role in our limited overs teams for some time and has impressed on the occasions he has led the side. I would like to congratulate him on the appointment and wish him, Peter Moores and the rest of the squad all the very best over the next three months.”

“Alastair remains an integral part of England cricket and continues to have a vital role in developing our emerging Test side. I would like to thank him for his leadership of the one-day side since 2011, a period which saw the team reach number one in the world, Alastair lead the team to more wins than any previous England captain and also make the final of the ICC Champions Trophy. Alastair will now focus on an exciting and challenging year of Test cricket beginning with a series against West Indies followed by an Ashes summer culminating in a series against South Africa next winter.” 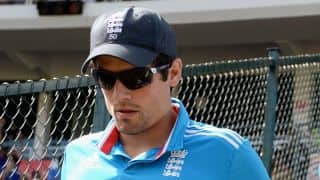