The first Test between India and Australia has been postponed and will be rescheduled.

The first Test between India and Australia, which was scheduled to start in Brisbane on next Thursday, has been postponed so that players can pay tribute to Phil Hughes.

Hughes’ funeral will be held in his hometown Macksville on Wednesday, where several players and officials from past and present expected to attend. His life and achievements will be celebrated at a funeral service to be held in Macksville High School, where Hughes was a student till 2006.

Cricket Australia (CA) confirmed the first Test at Gabba won’t start this Thursday and the ticket sales have been suspended, but fans have been told to hold on to them until a final decision on the status of the Test is made. The decision is expected in the next 24 hours.

“We know that there are many people who have purchased tickets to the Test match who will be wondering what happens next (and) once the situation has been resolved, we will advise them as a priority. 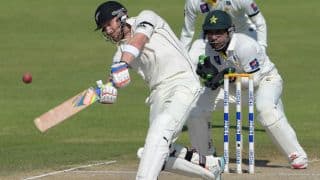