Dhoni did not reveal the playing XI for the second Test but R Ashwin is likely to replace Karn Sharma, as the Indian captain believes that the conditions at Gabba will help an off-spinner more.

Mahendra Singh Dhoni will return from injury and lead India in the second Test against Australia at Brisbane on Wednesday.

After the home One-Day International (ODI) series against West Indies, Dhoni took a break, handing the captaincy to Virat Kohli. Having nursed his injured right thumb, the Indian captain is back at the helm for the second Test against Australia at the Gabba.

Speaking to the official website of BCCI, Dhoni said that the break has helped him both physically and mentally.

This rest was very important for me. I got the thumb injury while playing in England and I played on because sometimes, these injuries settle as you keep playing.

But that wasn t the case this time and the right hand thumb only got worse with more batting. It was an important call for me because this is an important series and then there is the World Cup. So, I wanted 20-25 days at a stretch which I got. It was good for me because I got some time to work on my fitness as well, said the Indian captain.

Dhoni, who arrived late for the Australian tour and sat out of the Adelaide Test, praised his stand-in skipper Virat Kohli.

He has been fantastic, not only as a captain but also as a leader, even in the ODIs that he has led in. He is an aggressive character and is slightly different to what I am. What he did throughout the Test was great and especially his approach towards his own batting was fantastic. He had a lean series in England and it was good to see the way he prepared for this series and then the way he went out there and batted.

Dhoni praised Kohli s decision to go for the win, rather than playing out for time and assured that the team s approach will remain the same.

I thought it was the right approach that we went for the target. With the partnership [between Vijay and Virat], we were in a position to chase down the target. Unfortunately Vijay got out and we lost a few more wickets. From there it would have been very difficult to play for a draw and the only right approach was to go for the win. Our approach will remain the same in the coming Tests, said the 33 year old.

Dhoni did not reveal the playing XI for the second Test but Ravichandran Ashwin is likely to replace Karn Sharma, as Dhoni believes that the conditions at Gabba will help an off-spinner more.

This wicket will have something for the seamers and with Mitchell [Johnson] bowling left-arm over the wicket and other bowlers bowling round the wicket, there will be footmarks which an off-spinner will be able to exploit better than a left-arm spinner or a leg-spinner. 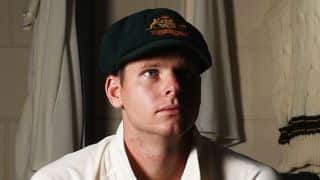 Australia will try to go up 2-0 against India at The Gabba: Steven Smith