One of the most watched spectacles across the globe, the Euro final was also seen live by many football and Ronaldo-crazy cricketers.

12 years ago, Portugal faced Greece in the final of Euro 2004 and lost in a heartbreaking manner. Cristiano Ronaldo, then a 19-year old player, could not hide his disappointment and cried on the field. He was already being touted as a future great by that time. In last 12 years, he has lived up to that reputation and went on to become one of world s greatest. ALSO READ: Jos Buttler compares AB-Kohli to Ronaldo-Messi, while David Warner calls them World s Best .

Then came Euro 2016, and this time around, Ronaldo was captaining his side. The pressure of expectations from across the globe was virtually insurmountable. He somehow led his side to the finals and then it all came down to that one final meeting, which would determine whether he becomes part of history or not.

And when the night came, we witnessed an anticlimax as Ronaldo was forced out of the match due to an injury, leaving his dream and his side high and dry. However, his team rose to the occasion and won the match and the prestigious trophy for their captain. One of the most watched spectacles across the globe, the Euro final was also seen live by many football and Ronaldo-crazy cricketers. We bring to you the best of the feeds from social media from cricketers hailing Ronaldo s and Portugal s achievement here:

You could see it on his face,how much it meant to him..well done #cr7 and portugal team & hard luck France who played so well throughout the tournament #euro2016 A photo posted by Mandeep Singh (@mandeeps12) on Jul 10, 2016 at 3:00pm PDT

This is when a team can be even more dangerous… #PORFRA #POR #Portugal #Euro2016Finale #Sanches #Nani Chris Gayle (@henrygayle) July 10, 2016

There you have it, Portugal! #underdogs Alviro Petersen (@AlviroPetersen) July 10, 2016

Ronaldo has got so much passion, desire and commitment, let alone class, ability and talent!! What a legend! #Euro2016Final #Ronaldo

Cristiano Ronaldo on a stretcher! 25 mins into #Euro2016Final and he is carried off due to injury. Damn! Hope he can return later #PORVFRA 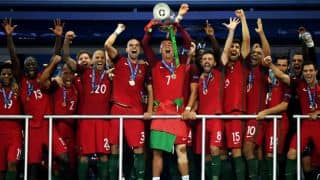 Euro 2016 ends is success along with giantkillers, Cristiano Ronaldo, hooligans

The friendly club of Indian legends