Lyon promised that Johnson will come out on the fourth day and won't hesitate to bowl another bouncer.

The day three of the first Test between Australia and India at Adelaide, has gone in the favour of the visitors. Murali Vijay, Cheteshwar Pujara and Ajinkya Rahane struck half-centuries, while captain Virat Kohli went on to score his seventh century, his third against Australia and second at Adelaide.

However, Kohli was welcomed to the crease with a bouncer from Mitchell Johnson. He was struck on the helmet and it stunned him. There were moments of anxiety in the ground, and the Australian team gathered around the Indian batsmen in a scene that resembled one big cricket family. It did seem that Johnson didn’t like being in the position he was in, and would he bowl another bouncer? That was indeed seemed like question mark.

Speaking about Johnson’s bouncer in the press conference, Australian off-spinner Nathan Lyon said, “It has probably been a positive thing, as bad as that sounds.”

“Your heart skipped a beat and I went to everyone just to ask if they were okay.”

“But we know the helmets work and now have the confidence that our quicks can bowl the bouncer again.”

Lyon promised that Johnson will come out on the fourth day and won’t hesitate to bowl another bouncer.

“He’s feeling good and I can guarantee he’s going to come out and fire in the second innings and have that aggression that we all love him for.” 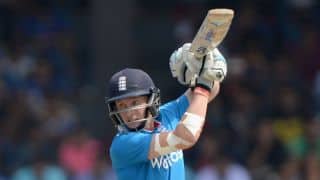 Sri Lanka vs England, 5th ODI at Pallekele: Joe Root gets to his half-century