Once an entertainer, always an entertainer! Former cricketer Virender Sehwag has been at his rampaging best of late on social media. The witty personality that he is, Sehwag entertained his scores of fans by ferocious stroke play in his playing days. And now, after retiring, he comes up with his daily dose of humour for his fans, wherein he posts funny birthday wishes, tweets on fellow cricketers. ALSO READ: ‘Yuzvendra Chahal and Katrina Kaif?’ and ‘Gooch ki Poonch’; there’s no stopping Virender Sehwag on Twitter.

In this series, his latest fun tweet was centred on star off-spinner Ravichandran Ashwin, whose all-round effort helped India win the first Test against West Indies at Antigua. Sehwag took to his Twitter handle to wish Team India and Ashwin in particular on the fantastic win in his own inimitable manner. Here s what he had to say:

You Win and also do Ash. Congratulations@ashwinravi99 on having an outstanding match, great win G N

His statement When you have a performer like AshWin, You Win and also do Ash meant a performer like Ashwin not only helps you win, but also ensures you have a lot of fun. He derived it by breaking Ashwin s name into two parts where first part of his name means fun (Ash). The tall offie could not help but reply to Sehwag’s funny way of wishing. He thanked Sehwag by adding it seems the former explosive batsman is smashing on Twitter too:

The conversation ended here as Sehwag signed off by congratulating the team and wishing his followers good night. 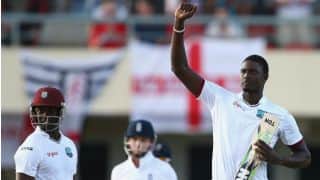