In an article in ICC's official website, Muralitharan, who has played along with Ashwin for Chennai Super Kings in the Indian Premier League (IPL), rated him second among spinners in the World Cup after Bangladesh's Shakib Al Hasan.

In an article in ICC’s official website, Muralitharan, who has played along with Ashwin for Chennai Super Kings in the Indian Premier League (IPL), rated him second among spinners in the World Cup after Bangladesh’s Shakib Al Hasan.

About Ashwin he wrote, “Another bowler with recent experience of Australian conditions and although he has not had an especially successful time, that experience will stand him in good stead. Has clever variations and will also revel in the extra bounce he is likely to find. Ashwin is also an excellent performer in the powerplay overs and when batsmen are looking to attack him, which could count in his favour.”

Writing about Jadeja, the Sri Lankan legend mentioned about his different style when compared to Ashwin and how the Indian left-armer can be dangerous.

“(He was) a key figure in India’s victory in the ICC Champions Trophy in England and Wales in 2013. Not a big spinner of the ball but, like Ashwin, his experience of batsmen attacking him and how to deal with that situation thanks to the Indian Premier League will be invaluable in this tournament. Will skid the ball on and, if he can be accurate and consistent, then batsmen may well perish trying to take liberties against him.”

Here’s Muralitharan’s list of spinners, he thinks who will do well: 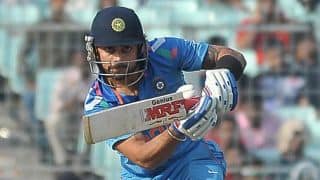 Virat Kohli and Ravi Shastri relax with yoga and massage