Though Australia has lifted the World Cup trophy four times, they are yet to win it on their home soil with Clarke, Shane Watson and Mitchell Johnson the only survivors from their 2007 success.

After the mouth-watering clash between New Zealand and South Africa, the buzz has shifted to the highly intense semi-final clash of Australia against India on Thursday at Sydney Cricket Ground (SCG). With both sides evenly matched, Australian skipper Michael Clarke is confident his team will live up to the expectations against the defending champions.

Though Australia has lifted the World Cup trophy four times, they are yet to win it on their home soil with Clarke, Shane Watson and Mitchell Johnson the only survivors from their 2007 success. To play in the final at Melbourne Cricket Ground (MCG), Australia have the stiffer task to remove the mighty Indians out of the picture.

“We’re about to find out,” Clarke said in a report from The Indian Express when asked how his players would deal with the pressure.

“I think you’ve seen the guys handle it really well throughout the tournament, the way the boys played in the quarter-final against Pakistan was extremely pleasing,” he added.

“Expectation is there because we are the number one ranked team in the world, the expectation is put on you because you have performed. Individually, you feel that on a day-to-day basis as an international sportsman. There’s been a lot of talk about pressure and expectation but that comes with the role. I think the boys will be fine,” Clarke later quipped.

Clarke has been a part of big matches in the past and exactly knows how to handle the pressure going into the match. He stressed that the big match experience is important and also said that young players are an integral part for making the team a balanced unit.

The 33-year old believes that being calm is the secret to their success as the Australians have done things very well. His mantra for success has been playing attacking cricket by picking up wickets and scoring runs. Entering into Thursday’s game, Clarke will be sticking to his plan.

“As big as this event is, as a player, it’s no different to any other game,” Clarke remarked. 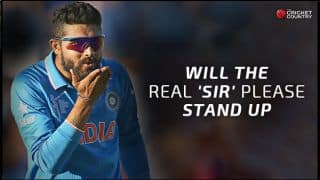 Will the real Ravindra Jadeja please stand up in ICC Cricket World Cup 2015 semi-final against Australia?