Former Australian pace sensation Johnson apparently is an avid follower of tennis and had it not been for his waning interest in the game in his growing years, he could well have ended up as a Wimbledon champion.

The premier tennis championship Wimbledon in going on in full swing and cricketers are making their presence felt at the extravaganza. While the likes of James Anderson and Stuart Broad were seen in attendance during a recent match, it is no secret that batting maestro Sachin Tendulkar too is a huge fan of tennis and makes it to the gala event every year without fail.

While we talk about the English and Indian cricketers love for the game, the Australians certainly are not far behind. Their captain Steve Smith too is hooked on to the sport and keeps sharing regular updates from the Wimbledon games with his followers. However, the biggest fan it seems is someone else. ALSO READ: Tennis, football and cricket all under the same roof.

Former Australian pace sensation Mitchell Johnson apparently is an avid follower of tennis and had it not been for his waning interest in the game in his growing years, he could well have ended up as a Wimbledon champion himself. The star cricketer, who was recently seen playing for the Kings XI Punjab (KXIP) in Indian Premier League (IPL) season 9, has revealed that his boyhood dream was to play at the grass courts of the All England Club as a professional tennis player before he turned 18.

A gifted junior tennis prodigy, Johnson competed at national schoolboy championships against players who went on to pursue tennis professionally. But by the time he turned 18, he started losing interest in the game as his reputation of being a lethal fast bowler had established by then. Cricket took over tennis as he went on to represent Australia in all formats. ALSO READ: Sachin Tendulkar goes under the knife; gets his knee operated.

I had idols like Pete Sampras and Stefan Edberg, I remember when I was quite young watching him (Edberg) play although I wasn t a serve-volleyer, Johnson was quoted as saying by cricket,com.au. I used to love watching Sampras, the single-hand backhand and his serve and I wanted to go to Wimbledon. I made a goal that I wanted to get there by the age of 18, but cricket was always a passion as well, always playing in the backyard and played it at school and eventually played club cricket and then really enjoyed that as well, Jonson added.

After making over 250 international appearances across formats for Australia, taking close to 600 wickets, terrorising batsmen world over and serving cricket so wonderfully, all we can say is that tennis loss was cricket s gain. 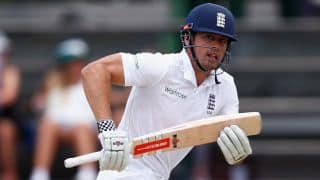 Group tennis players according to maturity, not age; says study